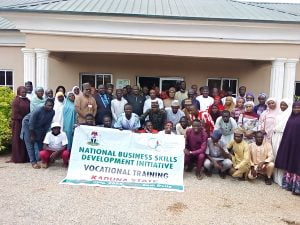 The Small and Medium Enterprises Development Agency of Nigeria (SMEDAN) has begun the training of 90 entrepreneurs on fashion designing in Kaduna State, under its National Business Skills Development Initiative (NBSDI).

The Director-General of the agency, Mr Olawale Fasanya, said this at the inauguration of the training exercise on Monday in Kaduna.

He said the trainees would also be exposed to welding and fabrication, adding that the programme would increased artisanal businesses among the Micro, Small and Medium Enterprises (MSMEs).

Represented by Mr Haruna Shuaibu, NBSDI’s Coordinator in the state, Fasanya said that globally, emphasis had shifted from paid employment to skills acquisition.

He said the programme seek to develop and increase the skills of the participants in fashion designing, welding and fabrication for self sustainability.

Fasanya said the choice of fashion designing, welding and fabrication was due to it’s high demand in the society.

“When people are not employed or engaged in legal activities that would earn them a living, it is natural they resort to crime and illegalities for sustainability.

“To reduce that level of restivness, especially amongst the youths, we developed the NBSDI as our own contribution to take youths off the street,” he said.

He noted that the expected outcome of the programme would be the improvement of business management practices and increased patronage of Nigerian artisans.

The programme, he said focused at increasing the number of formalised artisanal businesses, improved market support services by relevant agencies and stakeholders to MSMEs.

He said the agency trained 145 persons in various skills in 2021, in a bid to reduce rate of unemployment which resulted to crimes.

According to Fasanya, SMEDAN through the NBSDI programne will provide entrepreneurship skills and empowerment kits to fill the capacity gap among the youths.

“Also in the same vein, the agency is implementing the Conditional Grant Scheme (CGS), for micro enterprises in Nigeria.

“This programme is aimed at formalising a majority of the micro enterprises that are mostly operating in the informal sector.

“The programme, which involves capacity building, registration of the micro enterprises with the CAC, provision of micro insurance, opening of bank accounts and provision of N50,000 grant each has so far been implemented in 22 states where over 40,000 entrepreneurs have been impacted,” he said.

Also speaking, Prof. Kabir Mato, the state Comissioner for Business Innovation and Technology, said the state goverment had adopted sound programmes to cater for the needs of the MSMEs, especially through provision of skills to boost their businesses.

Mato, represented by Dr Mustapha Shittu of the Kaduna Enterprises Development Agency, said the MSMEs would key into the programme for their benefit.

He reiterated government committment to encourage growth of MSMEs, to reduce poverty, provide job opportunitues and enhance wealth creation in the state.

Mr Ibrahim Ismail, one of the beneficiaries, lauded the gesture, adding that the training would broaden their knowledge and skills.

He pledged to ensure effective utilisation of the equipment which would be given to them at the end of the exercise to expand his business.

The News Agency of Nigeria (NAN) reports that 3,330 entrepreneurs are participating in the NBSDI programme across the 36 states and the Federal Capital Territory (FCT).