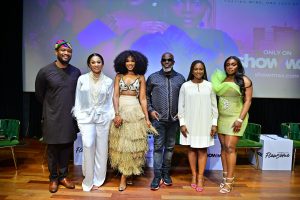 He made this known to the News Agency of Nigeria (NAN) during the star-studded screening event of Flawsome at the Africa International Film Festival (AFRIFF) in Lagos.

“Flawsome,” Showmax’s latest Nigerian Original drama series, revolves around the lives of four friends, portrayed by Bisola Aiyeola, Ini Dima-Okojie, Sharon Ooja and Enado Odigie, as they navigate their personal and professional lives while bound by the flawed, yet unbreakable ties they share.

Filani said that the drama series ‘Flawsome’ was a story that every lady on the street would be able to relate as it narrates to the everyday life of a woman.

“I do love what the outcome of the production flawsome has been, it’s a story that almost every lady on the street will be able to relate with.

“It tells compelling everyday life of a working class lady, trying to break the challenges that they have, and their love life, failures, success, just trying to make their dreams come true, which is why the story is relatable.

“Showmax is about the story telling course, we are a truly an African business, and our focus is to continue to tell African stories, “he said.

Filani also said that Showmax, was always opened to partnership to local producers, filmmakers to promote the entertainment industry.

”You know we are part of the Multichoice group, we will continue to encourage and promote local contents and movie makers, just like what AFRIFF is doing,

“Apart from this, we have exciting times for 2023, we are going to have another real Housewives of Lagos drama series, WURA drama series, and very interesting stories added to the content line.

“Viewers should go to www.showmax.com, signup and subscribe for Showmax services, “he said.

Sharon Ooja, who played the character Ivie told NAN that the viewers should expect the real situation that happens in life.

“I was pitched on the story to showmax, I did an audition, I got through my audition stage and I loved the character.

“What better way to create awareness for a woman than to use entertainment. The number one sensitization tool any economy can use is entertainment.

“It was just awesome that showmax understood that this was a beautiful story that was to be told and they made it happen.

“Viewers should expect the real situation that happens in life, they should expect love, tears, and happiness and above all, sticking together, “she said.

“Flawsome is a show about 4 young ladies navigating the Nigerian career space, in their respective industries, trying to make a headway.

“It is also about being into this health nourishing friendship, where each of the women support each-other, through trying times and great times.

“I was sent the script and as time goes on as an actor you become pretty selective of the roles that you take, and as I got this script, I knew instantly that it was a story that I wanted to be a part of.

“It was a character I wanted to play because the character is a power house, Dolapo is a force of nature, she is a force to be reckoned with, and she is a type of woman in many parts I would like to be identified with, “she said.

Akins Akinkugbe, the Producer of the drama-series flawsome, told NAN that it was a drama that goes through the life to show women in their leadership skills.

“My partner and I, Tola Odunsi, who is also the director of the show, we wanted to do something different in showing women in just relationships.

“We wanted to show women in what they go through, how they hold the society together.

“You will see friendship, how women thrive and what they go through. The world wants to see our story and we are telling them, “he said.