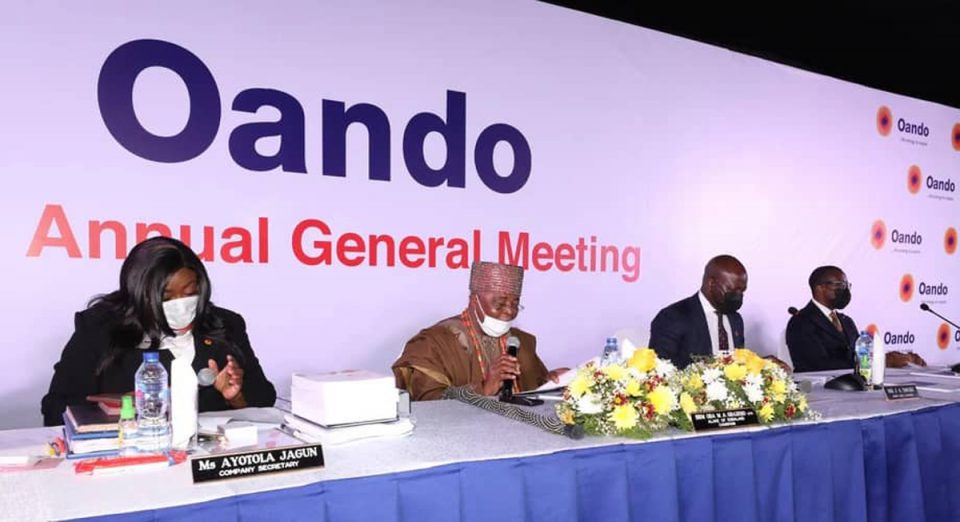 Shareholders of Oando Plc have reinforced confidence on the management of the company while urging the government to work with stakeholders to tackle the challenges facing the oil and gas industry.

A statement posted on Oando’s website said the shareholders made this known at the 43rd Annual General Meeting (AGM) of the company held on Wednesday in Lagos.

The statement said the shareholders were represented by proxies of their various associations at the AGM in line with the COVID-19 safety protocols.

According to the statement, all resolutions proposed at the meeting were approved including the election of Mrs Nana Mede and Mrs Ronke Shokefun as Non-Executive Directors.

The shareholders commended Oando’s management for appointing two women to the board of directors.

Mr Patrick Ajudua, an Oando shareholder said, “I want to commend the management for the appointment of Shokefun and Mede as directors, and we hope that they will bring value to us.”

Similarly, another shareholder, Dr Farouk Umar, said he was happy with the development and thanked the board for the appointment of the duo.

The shareholders also expressed concern over the issue of insecurity in the country such as vandalism, banditry, and terrorism amongst others.

They implored the government to partner with various stakeholders both in the public and private sectors to resolve this issue which they described as crippling the economy.

A shareholder, Mr Patrick Ajudua said: ” I’m worried about the issue of oil theft. This implies that the company is losing so much money to oil theft.

“This also makes it difficult for the country to meet the Organisation of the Petroleum Exporting Countries quota and negatively impacts our Gross Domestic Product.

“I applaud the approach by the Nigerian Maritime Administration and Safety Agency using their aircraft to track vandalism.

“I believe that when various stakeholders join forces, we’ll have a resolution to this issue.”

He reaffirmed his support to Oando management saying, “I want to assure you of our support to Oando and once we can solve these lingering issues of oil theft, we will be able to enjoy the fruit of our labour.”

Also, the leaders of the various shareholders and proxies encouraged Oando’s management to focus on corporate actions that would be beneficial to all.

In response to shareholders statements, the Group Chief Executive, Oando Plc, Mr Adewale Tinubu, reaffirmed the management’s commitment to continually do what’s in the best interest of shareholders.