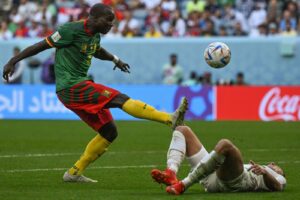 Cameroon and Serbia produced one of the best games of the Qatar World Cup but a dramatic 3-3 draw on Monday did little for their hopes of last 16 qualifications.

Cameroon took the lead against the run of play on 29 minutes when Jean-Charles Castelletto tapped in at the far post following a flick-on from a corner.

They kept up the pressure early in the second half and a well-worked move allowed Aleksandar Mitrovic to get a deserved goal.

But Cameroon substitute, Vincent Aboubakar changed the game again when he scooped the ball over the goalkeeper, assuming he was offside only to be ruled onside by the semi-automated system on 63 minutes.

The draw gives both sides one point, with Brazil and Switzerland on three ahead of their meeting on Monday.

Serbia take on the Swiss in their final group game on Friday when Cameroon play the Brazilians.

“I am satisfied because my players showed real fighting spirit. We were two goals down and came back.

“That is the spirit that was missing in the first game,” Cameroon coach Rigobert Song said, referencing the opening 1-0 defeat by Switzerland.

“The team showed the right reaction. There are still things to improve, but for today we are satisfied.”

Song made a big call before kick-off by choosing goalkeeper Devis Epassy ahead of Andre Onana, with media reports saying the Inter Milan stopper had been dropped for disciplinary reasons.

Serbia brought in fit-again winger Filip Kostic, after he missed the opening 2-0 defeat by Brazil.

The Europeans dominated the opening spell and striker Mitrovic had three chances, including one effort which came back off the post.

But out of the blue Cameroon took the lead, with defender Castelletto popping up completely unmarked for his first international goal.

Pierre Kunde then missed a good chance for the Indomitable Lions before Serbia levelled just before half-time.

Dusan Tadic sent in a free-kick from a central position and the burly Pavlovic rose highest to power a header into the corner, as another defender netted from a set-piece.

There was even time for Milinkovic-Savic to find the net with a measured shot from the edge of the area, which Epassy could only get a hand to.

The Lazio midfielder has been linked with top European clubs for years but a move has never materialized.

Cameroon’s defence for both goals could be questioned as Serbia’s rapid turnaround gave a better reflection of the game until then.

But an inspired substitution from Song set up another comeback.

Forward Aboubakar entered the fray on 55 minutes and soon made a difference with his size and skill.

“We had some problems, but we always played to win and played a very good game in the end.

“We are super motivated before the game against Brazil. We will look for our chance,” said Aboubakar.

His casual lobbed finish for his goal may well only have come about because he thought he was offside.

Serbia were then left shell-shocked as he carefully played in Choupo-Moting, who famously skipped the 2017 African Nations Cup won by his team but is now very much part of the group again.

Mitrovic had the best chances for a winner but lacked composure.