The customs controller urged the newly promoted officers to be hard working and disciplined, adding that their new ranks came with huge responsibility. 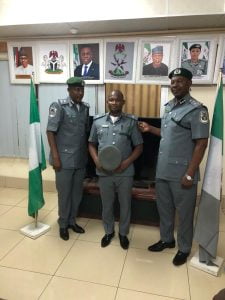 A total of 150 newly promoted officers of the Seme Border Command of the Nigeria Customs Service (NCS) have been decorated with their new ranks.
Decorating the officers on Friday at the border post, Seme Customs Area Controller, Bello Jibo, described the newly promoted officers as “the future of the service.”
“In the next few years, most of us will not be here again, so you must be dedicated to the service.
“Most of you will be given new roles because of your new ranks, I will advise you to tread the roads gently.
“Your work will change with your new rank and it is important you understand your new roles.
“The promotion exercise is to fill some vacancies because the service has not recruited for some time now,” Jibo said. Another officer being decorated in Sème Border Command of Nigeria Customs Service.
The customs controller urged the newly promoted officers to be hard working and disciplined, adding that their new ranks came with huge responsibility.
“This is the time for you to understand the structure of the service, may the service benefit from this promotion.
“Always consult with your colleagues because knowledge is power.
“You have to prove to the management that you are capable of that new rank and let the service know that you merit the rank.
“Though promotion comes from God, when you are uplifted, it means that they want you to show more commitment to the service.
READ ALSO:https://brandpowerng.com/ondo-chocolate-company-targets-1m-revenue/
“Put in your best to the service by adding value to human existence,” he said
Advising the newly promoted officers, the Controller of the Nigeria Immigration Service (NIS) Sème Border, Comptroller YU Galma, urged them to always think of the day they would retire.
“As you are promoted to the next rank, you are moving to your retirement. You should start planning for your retirement now,” he said.
In his remark, Mr R.N Opara, a newly promoted Assistant Comptroller of Customs, thanked the Comptroller General of Customs, retired Col. Ahmed Alli, for the promotion exercise.
Opara promised to be dedicated to his duty and  serve the management of service with the best of his knowledge.
The News Agency of Nigeria (NAN) reports that one officer was elevated to the rank of Comptroller, one promoted to the rank of Deputy Comptroller and seven others to Assistant Comptroller of Customs.
NAN also reports that 21 officers were promoted to Chief Superintendent of Customs, 66 officers Superintendent of Customs, 31 officers to Deputy Superintendent of Customs and 23 to the rank of Assistant Superintendent of Customs.
(NAN)
Don't miss
NEWS