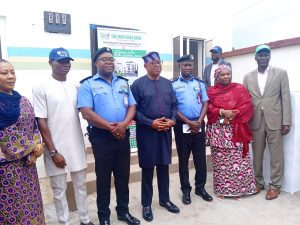 Ashafa said this at the inauguration and handover of a Police Post donated to the Federal Capital Territory (FCT) Police Command Lugbe by the FHA on Wednesday, in  Abuja.

According to him, the Police Post is the fulfillment of the promise the authority made to the Police earlier that they would be relocated to a  befitting place and that the authority does not joke about security issues.

Ashafa said that in spite of the spate of insecurity across the country, the authority’s estates nationwide were well secured, adding that the organisation did not take security for granted.

“The purpose of coming together is just to show the world that in whatever we do in terms of the provision of houses for the people who are citizens of Nigeria, here at FHA, we take security seriously.

“I will refer to the Police Post as the symbol of security for the entire Lugbe area. This is not the only one that we have here; we have a police station that is fully equipped, and fully manned.

“This is just the FHA, and whether there is any threat to live anywhere, when you get to any of our estates, you will find out that it is well secured through partnerships with all the law enforcement agencies.

“As we are talking, it is not only the Nigeria police that we have this kind of relationship with.

“If you go to our estate in Apo/Guzape, about five blocks within that estate are being inhabited by security personnel to give the proper security and safety to the people as the case may be,’’ he said.

The FHA boss said this was a partnership toward delivering their Corporate Social Responsible (CSR) to the society in the area of security.

He urged all Nigerians to play their own role in ensuring a safe society, adding that the issue of security should not be left to the law enforcement agents alone.

Responding, the FCT Commissioner of Police, (CP) Mr Babaji Sunday, appreciated the management and staff of FHA for supporting the security agenda of President Muhammadu Buhari, and thanked the organisation for the gesture.

Sunday promised the immediate deployment of personnel to the post, and pledged that the facility would be judiciously used.

He was represented  at the occasion by the Assistant Commissioner of Police (ACP) in charge of Operations, FCT Command,  Mr Mode  Bunza.