The aggrieved staff said they decided to stage the protest to attract the intervention of the Commission’s board which was sitting at the time. 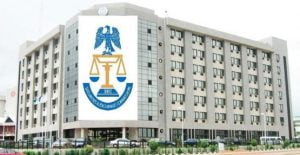 Staff of the Securities and Exchange Commission (SEC), on Thursday staged a peaceful protest at the Commission’s headquarters over stagnated promotions and directorate cadre appointments.

The aggrieved staff said they decided to stage the protest to attract the intervention of the Commission’s board which was sitting at the time.

Oleghe spoke to newsmen at the end of a closed door meeting with members of the association and the board.

“Before now, we have had several issues that the board and management have not attended to.

“One of the issues is the appointment of directors.

“We had several discussions with the executive management to appoint directors from the deputy directors we have today but they said they will appoint only six due to lack of funds.

“Reliably, we heard that there was a memo going to the board to bring in directors from outside including those that had served here, so we felt that will be injustice to the system,’’ he said.

“Another issue is outstanding promotion; we have four sets of promotion that are due but not carried out.

“There are staff that have stayed in a position for over seven years without promotion.

“The management said that they will do the promotion but we have not seen any evidence on ground.

“We heard that the board will meet today and we felt it was an avenue to ventilate our grievances before the board. We have discussed with the board members,” he said.

Also speaking, Mr Salihu Mohammed, an ex-officio member of the association, said the board had been able to douse the tension.

Mohammed said the staff were unhappy with some management decisions in the commission, saying “this is the hardest period for us.

“The board has made several commitments and we look forward to seeing those commitments being addressed.”

Mr Mamman Ali, the Treasurer of the association, said the association was relying on the legacies and integrity of the commission’s board Chairman, Mr Olufemi Lijadu to address their grievances.

Mr Ibrahim Boyi, the Executive Commissioner, Corporate Services of SEC, who addressed the staff during the protest, appealed to them to calm down, saying tthat they should not base their action on unofficial information.

Experts urge govt to encourage payment of taxes by being accountable