Having bagged all three points in their 2-1 defeat of Sierra Leone at the Moshood Abiola National Stadium, Abuja on Thursday, the Eagles need to garner another three points against the hosts. 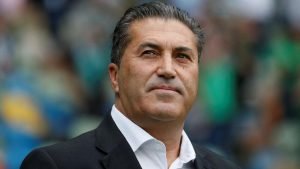 Super Eagles Head Coach, Jose Peseiro says the encounter against Sao Tome and Principe will bring the best out of his team as they seek to go top of the table.

São Tomé and Príncipe play hosts to the Super Eagles in one of the day-two matches of the 2023 Africa Cup of Nations (AFCON), Group A qualifier at the Grand Stade Agadir on Monday.

Having bagged all three points in their 2-1 defeat of Sierra Leone at the Moshood Abiola National Stadium, Abuja on Thursday, the Eagles need to garner another three points against the hosts.

Peseiro was reported in a statement by Ademola Olajire, Director of Communications at the Nigeria Football Federation (NFF) on Sunday, as saying that winning the game and topping the table was the team’s top priority.

“We want to be the team at the top of the table, so we must fight hard against the opponents. Every match, we must commit ourselves fully to winning it.

“As I said earlier in the week, Nigeria have huge pedigree and they also have both quality and quantity of players.

“It is important that we select the best all the time to win the big games.”

The statement also said that Nigeria’s delegation to Monday’s 2023 AFCON qualifying match against ‘The Falcons and True Parrots’ of São Tomé and Príncipe landed in the southern Moroccan city of Agadir on Sunday.

“The Air Peace airline’s Embraer 195 E2 which has flown the team to a number of match venues including from Morocco when they defeated Liberia in a FIFA World Cup qualifying match in Tangier, touched down at the Aeroport Agadir Almarissa.

“It landed at exactly 8.15 a.m. on Sunday, with a total of 25 players and technical and administrative crew.

“The delegation was led by NFF 2nd Vice President, Shehu Dikko and also included the General Secretary, Mohammed Sanusi, a number of board members, a couple of NFF Management and Staff, a few stakeholders and some media representatives,” it said.

The statement revealed that defender and deputy skipper William Ekong and midfielder Innocent Bonke were not part of  the 25 players who made the trip to Morrocco.

It said both players had returned to their respective bases in England and France to attend to injuries copped during the international break.

“Bonke was injured in the friendly game against Mexico in Dallas on 28th May, while Ekong suffered a groin strain in the 2-1 defeat of Sierra Leone in Abuja on Thursday,” it said.

It added that the Confederation of African Football has appointed Liberian official Hassen Zinnah Corneh as referee for the encounter.

“Alim Konate Aboubakar from Cameroon will be match commissioner. The match starts at 1p.m. Morocco time,” the statement said.