“Unfortunately, our wish is that the reality is different. Bulgaria has been an active part of the EU and NATO condemning Russia’s invasion of Ukraine. 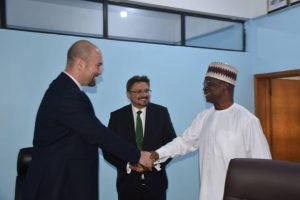 Russia’s war in Ukraine is having a negative effect on not only the Balkan states but on Africa and the rest of the world as well, according to the Bulgarian Ambassador to Nigeria, Mr Yanko Yardonov.

Yordanov expressed this thought in an interview with the News Agency of Nigeria (NAN) in Abuja after the signing of a news exchange agreement between NAN and the Bulgarian News Agency (BTA).

The ambassador condemned the war in strong terms saying that it has no place in the European Union’s (EU) 21st-century reality.

“Unfortunately, our wish is that the reality is different. Bulgaria has been an active part of the EU and NATO condemning Russia’s invasion of Ukraine.

“The bloc, by imposing sanctions on Russia, is trying to do its best to help Ukraine in defending herself from this unjustified aggression on its territory.

“But, of course, there’s a lot of negative effects not only on Bulgaria but also on the immediate neighbours of Ukraine, and also on a global stage, I see that Africa is also affected.

“Food security has become a challenge also by reason of the war in Ukraine. Also, Nigerian students cannot finish their studies and it’s a problem for Africa too.

“Bulgaria is suffering from this unfortunate war as well,” he said.

Bulgaria, a Southeastern European and Balkan state shares the Black sea with Russia, Ukraine, Turkey, and Romania, among others.

Wheat supply to the global market has dwindled with the Horn of Africa which depends largely on Ukraine for its supplies groaning under the pressure of scarcity.

The conflict has generated an increase in energy prices that is rippling around the globe, hurting consumers and pressuring world leaders to ease their pain.

Besides, Russia appears not to be affected by the sanctions imposed against it by the EU and its allies, making it look like the sanctions are not working.

In response to a question to that effect, Yardonov said: “… sanctions are never the preferred choice of anybody or country because they are biting on both business ties and on cultural interactions.

I am sure that you know no government all over the world prefers to see sanctions being imposed on somebody else.

“This is the only effect that this kind of aggression has in a global reality.

“And we are ready to pay the price of the effects but also to be on the right side of history.

“I am sure that Ukrainians – our partners – will recover and will be even stronger after this.

“And of course, the world will keep suffering because of this unjustified aggression,” he said.

He added that it was regrettable that Bulgaria’s trade balance, that of its partners, and that of its neighbours in the Balkan area, are depleting.

“Because of Ukraine there is insecurity over the black sea region as the war going on there is affecting the whole route.

“This also has affected countries like Romania, Turkey, Hungary, and some others because of the black sea region.

“These countries are trying to see that the war comes to an end as soon as possible.

“So when it comes to the war in Ukraine, Bulgaria is very clear; we understand the negative effect on the energy supply and also its supply chain.

“This war is also heating up the global economy just like COVID-19 did.

“So we ask that the aggression comes to end immediately,’’ he said.