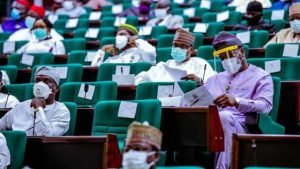 The House of Representatives ad hoc committee investigating the structure and accountability of the Joint Venture (JV) businesses and production sharing contracts (PSCS) of the Nigerian Petroleum Corporation (NNPC) has accused oil companies of tax evasion.
Rep. Abubakar Fulata, the Chairman of the committee said this in Abuja on Monday during the committee’s meeting with stakeholders at the National Assembly.
He said that the committee, relying on sections 88 and 89 of the 1999 Constitution, would direct police and other security agencies to compel the heads of organisations who failed to make their submission in respect of the ongoing investigation to do the needful.
Fulata said tax evasion by the oil companies particularly, the International Oil Companies (IOC) had deprived government of revenue in the country.
He said in spite of several invitations, some of the organisations were yet to submit documents to the committee.
He said some of the invited organisations had submitted some documents but the committee found some gaps and further invited them in order to fill the gaps.
“The Federal Inland Revenue Service, Chevron Nigeria Ltd, Shell Nigeria Exploration Nigeria Ltd are among the organisation to appear before the committee at the National Assembly on Nov 1,” he said.
He said that the committee also gave the organisations between seven and 21 days to make their submission or risk being compelled to do so by the security agencies in line with sections 88 and 89 of the 1999 Constitution.
“The following organisations have not made any submission in spite of public notice and letter of invitation sent to them.
“They include: the Central Bank of Nigeria,  First Exploration Petroleum Development Company Ltd. Eroton Exploration and Production Company Ltd.
“Others are Ten Oil Petroleum and Energy Ltd,  Staoil Nigeria Ltd, Belema Oil Producing Ltd, Emo Exploration and Production Ltd, Sterling Oil Exploration and Production,” he said.
Editor’s Picks  Labour Party unveils Presidential campaign council with15M boast

UN Women call for reduction of Electoral Violence Against women

SWC passes Vote of No Confidence on Kaduna NNPP Chairman