Over the years, it has tried to establish museums fitted with a collection of artefacts belonging to cultures of different ethnic groups. Some of these artifacts include wood, ivory, metal and terracotta. 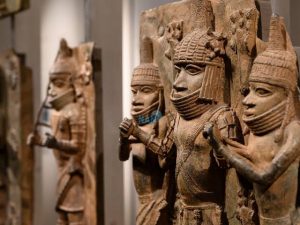 The National Commission for Museums and Monuments (NCMM) founded in 1979 is charged with collecting, documenting, conserving and presenting national cultural properties to the public for the purposes of education, enlightenment and entertainment.

Over the years, it has tried to establish museums fitted with a collection of artefacts belonging to cultures of different ethnic groups. Some of these artifacts include wood, ivory, metal and terracotta.

Others include the Egungun costumes, clay pots, masks, textiles, drums, dane guns and wooden figures with collections of statues from different periods of Nigeria’s history.

The museums also contain traditional musical instruments like sansas, fiddles and flutes, as well as divination bowls and ancestral figures made of wood, like Mumuye figures that are used by different communities.

Some analysts say that the NCMM has indeed tried to meet its mandate in spite of limited resources at its disposal, while others, especially tourism stakeholders, believe that a lot more must be done to improve patronage to the museums and generate revenue.

At the celebration of the International Museum Day last month, Prof. Abba Tijani, Director-General of NCMM, hinted of high prospects for the museums when he said that Nigeria would be retrieving over 1,500 stolen artefacts this year, out of over 5,000 artefacts stolen from different parts of the country.

Tijani said that the artefacts were expected from Germany, Australia, New Zealand, United Kingdom and other individual museums across the globe.

According to him, upon return of the artefacts, the NCMM will organise series of exhibitions where they would be displayed for the general public to have a glimpse of them.

But as Nigeria awaits the new consignment of artefacts expected to enrich its museums, stakeholders have continued to emphasise the need to adequately fund the NCMM to boost the quality of museums and make them attractive to the general public.

They say that strengthening the museums has become imperative since many people visit them for research purposes, while many go there for sightseeing and education.

One of such stakeholders, Mr Michael Balogun, Chief Executive Officer, Tour2Nigeria, wants the Federal Government to further invest in upgrading the museums to accommodate virtual technology and argumented reality.

According to Balogun, privately-owned museums across the country are properly managed as opposed to government-owned.

He suggests that the museums be outsourced to private operators who, he believes, will manage them well, if the nation must generate revenue from the facilities.

He particularly suggested that physically challenged individuals be considered by acquiring brailles and other means through which they could learn.

“The national museums are nothing to write home about. If you consider the standard of most international museums, we are lagging behind. It is only the private outfits that appear adequately managed.

“My suggestions will be to outsource it to the private sector and get it updated to the level of using virtual technology and augmented reality,” he says.

Nigerian flutist, Omatshola Iseli, popularly known as “Tee Mac”, opines that it is criminal for the Nigerian government to neglect the nation’s museums which host the nation’s historical legacy.

“It is a crime that the Nigerian government has neglected the museums, our historical legacy.

“The Ministry of Eduction is particularly guilty; when I was a student in Switzerland, we visited regularly the museums and even traveled to Ravenna, Rome and Paris to visit museums as part of our education.

“The museums accommodate elements of our history; we should work with the consciousness that our history is our wealth,” he says.

Another stakeholder, Efetobo Awhana, Organiser of the annual Nigeria Travel Week, says that the Federal Government must look into renovating most of the museums which he insisted are not attractive enough to woo tourists.

Awhana says that until that is done, the facilities will not generate the needed interest and revenue for government.

“Our museums have a huge potential, given the rich history and diverse cultural heritage of Nigeria.

“Currently, our museums are very unattractive to tourists; most of them look like abandoned book shelves – damp and dusty – without any vibrancy.

“They need serious renovation to, at least, make them presentable,” he said.

Awhana, however, commended government’s efforts toward the gradual return of the looted Nigerian artefacts, and urged the Federal Government to ensure that the retrieved artefacts were properly preserved.

“We have often shown a lack of appreciation for historical artefacts which are highly treasured every where in the world.

“We hope that with the publicity and global attention these repatriations are attracting, those who will receive the artefacts will preserve them and do what is right in the interest of Nigeria,” he says.

For Ms Bimbo Esho, Managing Director, Evergreen Musical Company, to properly reposition the museums for improved revenue generation, the members of staff of the museums must be exposed to periodic training.

Esho says that the federal government must also fund the museums adequately to be able to function optimally and engage in media promotion of the museums to generate traffic.

“Very often, our artefacts are stolen and sold abroad because those who run the museums don’t understand the need for curating our future.

“We need to train museum staff on the need to curate these relics for future purposes. The museums also need proper funding and media promotion to gain public attention.”

Mr Olugbenga Adebayo, Chief Executive Officer, Gadeshire Travels and Tours, on his part, wants all cultural ambassadors, curators and traditional leaders to work together toward drawing a master plan that will make the museums attractive.

“Government at all levels must be ready to come up with a master plan on creating at least a museum each, in all the 774 local governments in Nigeria, aside the existing National Museums.

“These museums at the local governments will document various objects of history and culture of the people of that locality.

“Our National Museums must also be repositioned in terms of structures to fit into contemporary needs.

“Our museums also need to be updated and improved upon in terms of proper documentation of the objects and proper training must be given to the personnel.

“Where it is possible, the documents can be translated to various languages for the purpose of foreign visitors,” he said.

As the stakeholders continue to offer suggestions toward making the museums more viable, analysts have urged government to work out strategies that will make the facilities more attractive in view of their socio-economic relevance to Nigeria and Nigerians.