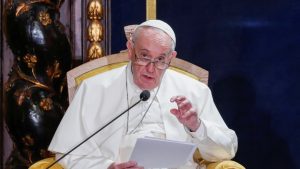 Pope Francis underlined the importance of the world’s religions in the struggle for peace, in comments at the opening of the Congress of Leaders of World and Traditional Religions in the Kazakh capital Nur-Sultan on Wednesday.

It is not appropriate to show “distrust and contempt for religion,” he said.

“Religion is not a problem, but part of the solution for a more harmonious life in society,” the pope told the 100 delegations from 50 countries gathered at the meeting.

Nowadays, geopolitical, social, economic and ecological crises are testing many institutions and democracies.

They “endanger security and harmony between peoples,” the pope said.

His three-day visit is his third abroad in 2022, following trips to Malta and Canada.

While the world’s religions have been in dialogue for decades, these times are “still plagued by the scourge of war, by a climate of hostility and confrontation, by an inability to step back and hold out a hand to the other,” Francis said.

“Brothers and sisters, a leap forward is required, and it needs to come from us,” he said.

“God is peace. He guides us always in the way of peace, never that of war,” the pope said.

His comment could be seen as a call to the Russian Orthodox Patriarch of Moscow, Kirill, who has backed Russian President Vladimir Putin’s war on Ukraine and refused to travel to Kazakhstan to meet the pope, as the Vatican had hoped.