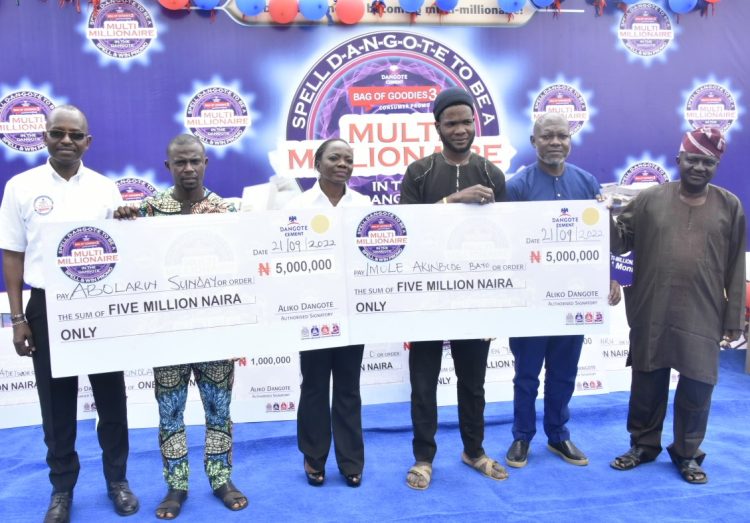 The National Lottery Regulation Commission on Wednesday lauded Dangote Cement Plc for its commitment to giving back to customers through the ‘Bag of Goodies Promo Season 3.’

According to the statement, Ojeh lauded the efforts of the company during an award winning ceremony where customers of Dangote Cement were presented cash and other prizes.

“The management of Dangote Cement should honestly be appreciated by its customers as the company paid handsomely to the Federal Government to be given permission to conduct the yearly promo,” he said.

In the same vein, Representative, Federal Competition and Consumer Protection Commission, Susie Onwuka, noted that the Season 3 promo was bigger than the previous two promos.

She charged the cement company to continue to add value to the lives of its customers.

“By so doing, the company is also helping to boost economic activities in Nigeria,” she said.

National Sales Director, Dangote Cement Plc, Mrs Funmi Sanni, said the company had set aside a total of N1 billion in cash and gifts for the ongoing promo running from July 5 to Oct. 31.

Some of prizes, she said, included television sets, refrigerators, rechargeable fans, 2KVA generators, and millions in airtime of major networks in Nigeria.

She assured customers yet to win that there were enough gifts and money for all that patronised the brand because every bag of dangote cement contained both winning and non-winning scratch cards.

She added that the promo was designed to continuously reward loyal consumers who had stayed faithful and remained the backbone of the cement business.

“We are offering life-changing prizes, which have immense economic values as they can be used to kick-start small scale businesses.

“These prizes are targeted to help many families recover from the nation’s economic situation,” she said.

Speaking on behalf of the winners, Mr Abolarin Sunday, Teacher and cement retailer, thanked the company for initiating a promo of this calibre that had changed the lives of so many cement users.

“I won N5 million and this will change my life for good.

“I have never doubted the promo because I have friends that have also won from the Promo as some people won cars last year and I am happy to be winning my own huge sum today.

“On behalf of all of us that won in Sagamu, I thank the management and staff of Dangote Cement and pray that the company will continue to grow from strength to strength,” he said.