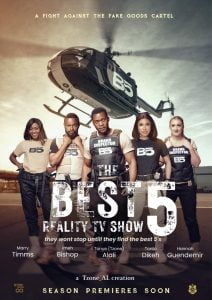 A reality Television (TV) show will support the Federal Government’s efforts toward increasing the revenue base and creating 10,000 jobs to boost the nation’s economy.

The Chairman, Uproar Multimedia Ltd., Tonye Alali, made this known on Monday at a news conference in Abuja.

Alali said: “Since effects of fake and substandard goods cause decline in taxation, one of the things we are going to do is to support the government’s tax department to have an increment by 10 per cent.

“And, also our intention is to ensure that we create 10,000 jobs for our youths through this programme.’’

He said that the TV series was aimed at boosting the nation’s economy by mitigating the damaging effects of fake goods and make Nigeria the host to millions of foreign tourists yearly.

According to him, it is also to rescue the millions of people that are falling victims to fake and substandard goods yearly,

Alali added that the TV show would mitigate the negative impact of other national TV programmes like the Big Brother Naija that influenced the lives and culture of Nigerian youths.

“Big Brother Naija franchise keeps polluting the minds of our youths through immorality and the abuse of our respected African culture.

“But, our TV series focus on 25 celebrities from across the world, whose mission is to complete weekly community development projects on a quest to become the next global faces of development.

“All the assignments on the programmme are created to address both national and international issues.

“This is because, as the creator, I believe we all humans are fragments of that perfect world, because we all carry unique substances required to build the world of our dreams.

“Therefore, I feel, it is the responsibility of every Nigerian to make significant contributions with what we have as a way to foster speedy development in the mother land,’’ Alali said.

According to him, part of the tasks that will be given to this celebrities include verifying the authenticity of most made-in Nigeria brands through professional brand inspection.

“This should be in line with Goal 12 of the United Nations Standard, which is to ensure responsible production for safe public consumption.

“This particular assignment was added to save the dwindling economy from the damaging effects of fake and substandard goods and to rescue millions of our people who fall victims to counterfeit goods.

“This is because a report from the International Chambers Of Commerce confirms that fake goods industry accounts for the underdevelopment of most countries in the world, especially countries in Africa.

“This is simply because it reduces taxes from genuine businesses and destroys millions of human lives through fake beverages and drugs,’’ he said.

Alali urged all the Nigerian brand owners to comply with the vicarious approach to promote authentic Made-in- Nigeria brands.