However, at a time Nigerians expected ASUU to call off the strike, the union on May 9, rather announced a further extension of the industrial action by three months. 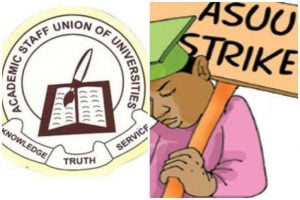 Some stakeholders in the education sector in the South-East have reacted to the three months extension of the industrial action by the Academic Staff Union of Universities (ASUU).

The stakeholders made the reactions in separate interviews with the News Agency of Nigeria (NAN).

NAN reports that ASUU had embarked on a nationwide warning strike on Feb. 14, 2022.

The industrial action was aimed at pressing home its demands which include revitalisation of public universities, earned academic allowances and the deployment of the University Transparency and Accountability Solution for payment of university lecturers.

However, at a time Nigerians expected ASUU to call off the strike, the union on May 9, rather announced a further extension of the industrial action by three months.

Reacting to the development, the President, Civil Rights Realisation and Advancement Network, Enugu,  Mr Olu Omotayo, described the development as a grave danger to tertiary education in the country.

Omotayo said that the inability of ASUU and the Federal Government to resolve the labour dispute was capable of stagnating whatever economic gains the current administration had made.

According to the lawyer, you cannot talk about development without education and security.

He said that it was worrisome that the politicians were busy talking about politics and restrategising on how to win elections while students were idling away at home.

“They are creating problems that will haunt us in the future. Some of these students might be forced to join bad groups, thereby, increasing crime rate in the country,” Omotayo said.

Abuchi, however, said that the students would continue to engage ASUU and the government to ensure timely resolution of the industrial dispute.

A lecturer at the Institute of African Studies, UNN, Mr George Akubue, said that ASUU would not have embarked on the strike had the government shown serious commitments in addressing the issues in contention.

Also, a parent, Mr Monday Ugwu, said that parents had not found it easy since the strike started due to the high cost of living in the country.

Ugwu said that the situation was more pathetic considering that some of the students would have graduated before now to enable them contribute to the welfare of their respective families.

An undergraduate, Miss Vera Iloegbuna, said that the situation had almost made her lose interest in education, adding that someone could still be successful in life without university education.

Mr Paul Ibiam, said that the strike was affecting the future of the students who had been languishing at home since February .

Ibiam appealed to the Federal Government and ASUU to embrace genuine dialogue in order to avert an indefinite strike.

Also, the Executive Director of a non-governmental organisation, Heroine Women Foundation, Mrs. Onyinye Mamah, called on the government to find a way of resolving the issues with ASUU.

Mamah also appealed to ASUU to find a better way of expressing their grievances than shutting the schools.

Also, the immediate past President, National Association of Nigerian Students, Mr Chidi Ilogede, blamed ASUU and the government on the condition of the Nigerian students.

Ilogede said that while the government had continually betrayed Nigerian students following their unfulfilled assurances to end the strike, “ASUU does not care since they believe they are pressing for what their union wants.”