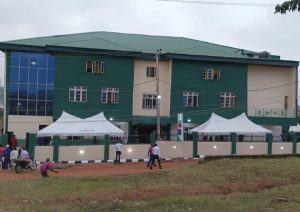 The Redeemed Christian Church of God,(RCCG) has inaugurated a 2,500 capacity church auditorium in Ado-Ekiti and also planned to build maternity and school later.
Speaking on the project on Sunday, at Jesus Embassy, Ado-Ekiti, the Provincial Pastor-In-Charge, Ekiti Seven, Mr Gabriel Adarabioyo, said the vision was to win more souls that would be heavenly focused and bring about a saner society in Nigeria.
Adarabioyo said the aim to embark on the project was borne out of the desire to see a church that would be filled with saved souls, those who would always exhibit the “Christ-like” attitudes that will make  Ekiti, Nigeria and the world a better place for all and sundry.
“The purpose of this project, which has a capacity of more than 2500, is to win souls for God. I had a vision of turning the small  building I met on my arrival to a Cathedral.
This building foundation was laid on March 16, 2019 and completed in July 2022,  after spending about N100 million.
”Twenty million naira was given to us by the national body of RCCG, while N1.7 million was from the Region 25 and the remaining was internally generated by the province.
“Today, the dedication of this house of God is a dream come through,” Adarabioyo said.
The cleric lauded the contributions of all, who made it possible for the realisation of the project, praying that God Almighty would bless and  reward them greatly .
He thanked God Almighty for how far He had been with the church, particularly the Ekiti province seven, which was birthed in 2018, saying in less than four years the church had moved from being a small church to a Cathedral. He said aside auditorium containing over 2,500 capacity of worshippers at a service, the building also had about 10 offices and about 6 of them ensuit as well as a conference hall.
READ ALSO:https://brandpowerng.com/wives-groan-over-husbands-football-affairs/
”If Jesus tarries, the province, is proposing a maternity home, a school and creche that will commence soonest for the  benefit of Ekiti people and Nigeria in general,” he said
The  dedication of the Church was done by the Pastor-In-Charge of RCCG, Region 25, Mr Goke Kuti.
Kuti in his sermon title: ”From Zero to Hero 1″ citing 1Samuel 2:8, prayed  for multiple celebration, wonders and answers to prayers in the auditorium.
There were presence of dignitaries which included, the Chairman, Ekiti Traditional Ruler Council, Oba Gabriel Adejuwon, Oba Adegbenro Galore, the Onifaki of Ifaki-Ekiti, former Speaker, Ekiti House of Assembly, Mr Kola Oluwawole and clerics from across the country at the occasion among others.
(NAN)
Sign in
Welcome! Log into your account
Forgot your password? Get help
Password recovery
Recover your password
A password will be e-mailed to you.