Iyari explained that the maiden edition of the programme, “Quickteller Barz and Notes” music talent show,  would have the youths in a production camp, where they would be tutored on the business of music, its legal aspect and  life performances. 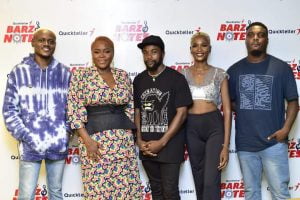 Quickteller, an online payment platform, has selected six  Nigerian youths to be groomed in the business of music to improve the entertainment industry.
Priscilla Iyari, Brand Manager, Quickteller and Group Marketing and Corporate Communications, Interswitch, disclosed this in a statement on Sunday in Lagos.
Iyari explained that the maiden edition of the programme, “Quickteller Barz and Notes” music talent show,  would have the youths in a production camp, where they would be tutored on the business of music, its legal aspect and  life performances.
“At the end of the production camp, the youths will release an extended play which will be promoted by quickteller on their behalf so that alot of people can experience their craft and engage with them.
“All six talents will be winners, there will be no finalists at the end of the production,” she said.
She said that while in the production camp, they would work with brand and image experts to tutor them.
Speaking on the rewards for the talents, she noted that quickteller was making investments on their behalf while working on their music production by working with well known music producers in order for them to come up tops in the music industry.
“The most valuable reward is the platform they will be getting afterwards.
“There is the opportunity to get on the music world stage, “One Music Africa Fest” courtesy of quickteller which cannot be quantified to any cash prize.
“They are also going home with their own music produced by celebrity DJ Kaywise,  Speroachbeatz, Yung Willis, Rexxiepondabeat, Gospelondebeatz, and P Prime, cash prizes and other merchandise.
Don't miss
ENTERTAINMENT

“Quickteller is a catalyst to put relatively unknown talents on the global stage where they get more exposure,” she said.
Iyari said that after the review of hundreds of entries of prospective talents contending for the show, Quickteller picked the top six participants.
She said the selected participants include: Chiamaka Okechukwu, Ann Damar, Martins Asogwa, Emmanuel Elijah, Prince Macaulay-Smith and Phillip Eze.
READ ALSO:https://brandpowerng.com/lagos-fuman-chairman-pledges-to-reposition-fuji-music/
According to her, it was a keenly contested competition among the talents as there were over 200 entries from young and creative songwriters across Nigeria, shortlisted to 20, and then to the top and final six.
“The contestants who have now successfully scaled through the adjudication process were judged based on qualities such as the originality, vocals, writing skills, creativity, flexibility, willingness to evolve, and the ability to leverage value.
“Celebrity singer and songwriter, Omawumi Megbele and celebrity producer, Gospel Obi (GospelOnDeBeatz) were members of the panel that selected the top six  finalists,” she said.
Iyari said that the participants would be transitioning into the production camp for seven days,  where their career in music would be shaped by seasoned players in the music business.
“To guide these artistes, useful insights into the music business will be delivered by established producers, On-Air-Personalities, disc jockies, as well as other celebrity music artistes.
“The participants will also be recipients of lessons in career sustenance, and how best to create value out of their nascent individual brands,” she said.
(NAN)