He explained that the CBN initiative in 2012 targeted a reduction of the rate of financially excluded Nigerians, from 46.3 per cent of the then 84.7 million accounted in 2010 to 20 per cent by the year 2020, representing a reduction of 26.3 per cent. 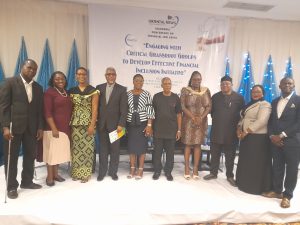 Dr Uju Ogubunka, Chairman, Bank Customers Association of Nigeria, has called on stakeholders in the finance industry to pursue the financial inclusion programme of the Central Bank of Nigeria (CBN) until all eligible Nigerian adults are included.

He explained that the CBN initiative in 2012 targeted a reduction of the rate of financially excluded Nigerians, from 46.3 per cent of the then 84.7 million accounted in 2010 to 20 per cent by the year 2020, representing a reduction of 26.3 per cent.

According to him, it means that the percentage of the included would rise to 80 per cent from 53.7 per cent, within the same period.

“As some of us will remember, the CBN initiated the National Financial Inclusion Programme in the year 2012 and that was about a decade ago.

“The programme is a kind of response to the discovery from a study in 2010, that about 39.2 million or 46.3 per cent of the then 84.7 million adult populations in the Nigeria were excluded from the formal Nigerian financial system.

“So, females accounted for a higher number and percentage of the excluded than males.

“On the other hand, males accounted for a higher number and percentage of those included in the Nigerian financial system,” he said.

According to him, the situations were identified to have negative or adverse consequences or implications on the financial system and the economy.

Ogubunka noted that especially as almost half of the financial resources in the country were in the hands of people operating outside the formal financial system.

The chairman said that while the year 2020 has come and gone and it was not clear whether the overall target of the programme was met, it is obvious that the Nigerian adult population has grown beyond the 84.7 million baseline in 2010.

“Thus, the number of those to be included in the financial system has also grown past the baseline 39.2 million that were excluded,” he said.

Ogubunka charged financial operators to continue to brainstorm and contribute towards achieving total inclusion of all eligible Nigerian adults in the financial system.

He said that it was necessary to drive and attain higher growth and development in both the financial system and the national economy for the benefit of all Nigerians.

The chairman commended the publisher of Oriental News for organising the conference, saying it shows that it was some concerned and serious minded stakeholders in the Nigerian financial system and the economy.

In her welcome address, Mrs Yemisi Izuora, Editor, Oriental News Nigeria, said that the conference was conceived by STANGMEG communications, publishers of Oriental News, after a painstaking study on the progress and prospect of the initiative.

Izuora said that over the years, the Federal Government and stakeholders in the financial sector had to deal with expanding financial service to a large community of undeserved population.

“We strongly believe and are convinced that this conference will help to advance inclusive financial systems for the identified groups, which include community-based people.

“Others include; artisans, low income groups, market men and women, special persons that undertake various vacation, as well as displaced persons who are well represented,” she said.