He explained that following verification, the directorate discovered that 20,191 of these pensioners could not be found on the PTAD verification data base but were on the payroll. 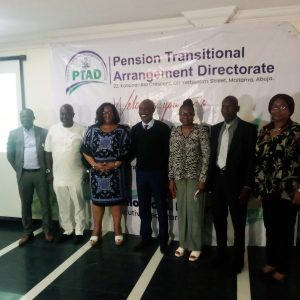 Mr Kabiru Yusuf, Director, Parastatals Pension Department, PTAD made the disclosure when he spoke with the News Agency of Nigeria (NAN) on the side-line of a one-day training for newsmen covering pensions.

PTAD was established by the Federal Government in August 2013 in compliance with the provisions of the repealed Pension Reform Act (PRA) of 2004.

Its establishment was necessitated by the need to reform the old Pensions Offices under the Defined Benefit Scheme which was bedevilled by myriad problems.

Yusuf said while reviewing the number of pensioners on its payroll in the last quarter of 2020, it discovered that there were 120,000 of them prior to the call for verification.

He explained that following verification, the directorate discovered that 20,191 of these pensioners could not be found on the PTAD verification data base but were on the payroll.

“After a lot of due diligence, we decided to remove them from the payroll in the belief that if they were genuine pensioners, they would come out to present themselves.

“We established a robust complaint management system and notified the Pensions Commission, our regulator, the National Assembly and agencies where the pensioners claimed to have worked,’’ he said.

He said only 4,834 of the affected pensioners went through the process of the complaint management to present themselves for verification and they were restored on the payroll.

Yusuf said some other cases caused by errors were corrected and the affected persons were also restored to the payroll .

“Up till now, we have close to 16,000 pensioners unaccounted for and unless anyone comes out with valid identification, they are people who have been collecting pensions illegally,’’ he said.

The director said he could not readily name the amount of money the directorate was able to save from ending the illegality, but that in 2016, during the directorate’s initiative to validate BVN of pensioners, it saved up to N7 billion.

Yusuf noted that the initiative was geared towards bringing integrity and validity to the data base in place.

He said that verification was the only recognised basis for PTAD to ascertain that the pensioners it was responsible for were not only qualified but were alive.

The director said the verification would enable the pensioners to link their details to their bank accounts biometrics and thereafter compute their entitlements and pay them their monthly pensions, different from the inherited pension which had lots of errors in it.

He expressed disappointment that PTAD only got an Excel list of pensioners’ names, amounts, bank names and account numbers when it took off in 2014.

“We started making payment on what was called ‘good faith ‘ at that time until when we were able to do verification,’’ he noted.

He told NAN also that PTAD had opened state offices and several social digital platforms manned by competent officers to bring its services closer to pensioners.

Earlier, Dr Chioma Ejike, Executive Secretary, PTAD, said the directorate had worked assiduously over the years to change the narrative of pension administration in Nigeria.