The President also signed the Finance Bill 2021, which he said was critical to the execution of the 2022 budget. 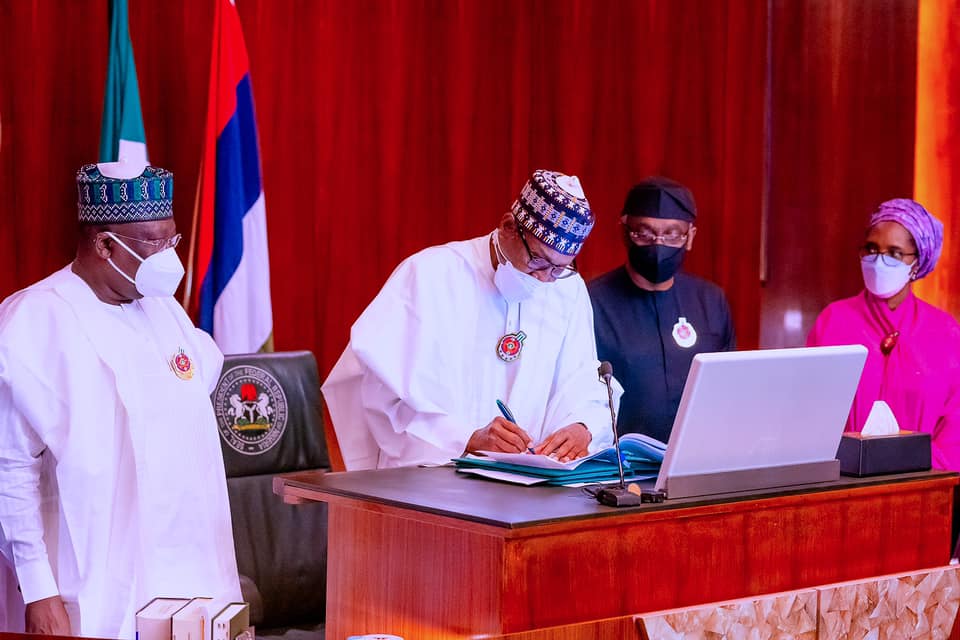 President Muhammadu Buhari has signed the 2022 Appropriation Bill into law.

It is tagged “Budget of economic growth and sustainability.”

The budget, valued at N17.126 trillion, was transmitted to the President by the National Assembly on December 24.

The President also signed the Finance Bill 2021, which he said was critical to the execution of the 2022 budget.

His release on the signing of the budget reads:

It was my pleasure to sign into law today the 2022 Appropriation Bill as well as the enabling 2021 Finance Bill.

I would like to thank the Senate President, the Speaker of the House of Representatives, and indeed all the Distinguished and Honourable Leaders and Members of the National Assembly for the expeditious consideration and passage of these Bills.

I also appreciate the continuing cooperation and commitment of the 9th National Assembly to the restoration of a predictable January to December fiscal year, as provided for in the Constitution.

The Finance Bill 2021 is particularly critical for the successful implementation of the 2022 Budget. Its passage further underscores our firm commitment to regularly support federal Appropriation Bills with Finance Bills designed to facilitate their implementation.

I equally appreciate the continued mutual understanding, collaboration and productive engagements between officials of the Executive and the Legislative arms of government which have made this expeditious consideration as well as passage of the Bills possible.

I must however express my reservations about many of the changes that the National Assembly has made to the 2022 Executive Budget proposal.

Some of the worrisome changes are as follows:

iii. Reduction of N14.5 billion from several projects of the Ministry of Agriculture, and introducing over 1,500 new projects into the budgets of this Ministry and its agencies.

several of these projects by the National Assembly may render the projects unimplementable or set back their completion, especially some of this Administration’s strategic capital projects.

iii. Most of the projects inserted relate to matters that are basically the responsibilities of State and Local Governments, and do not appear to have been properly conceptualized, designed and costed.

It is surprising that despite the National Assembly increasing projected revenue by N609.27 billion, the additional Executive request of N186.53 billion for critical expenditure items could not be accommodated without increasing the deficit, while the sum of N550.59 billion from the projected incremental revenues was allocated at the discretion of National Assembly.

I signed the 2022 Appropriation Bill into law to enable its implementation to commence on 1st January 2022.

However, I will revert to the National Assembly with a request for amendment and/or virement as soon as the Assembly resumes to ensure that critical ongoing projects that are cardinal to this administration, and those nearing completion, do not suffer a setback due to reduced funding.

As the 2022 Budget will be the last full year budget to be implemented by our Administration, its effective implementation is very critical for delivering our legacy projects, promoting social inclusion and strengthening the resilience of the economy.

Drug Security: NAFDAC insists on local manufacturing, to reduce importation to 30% by 2025 — D-G