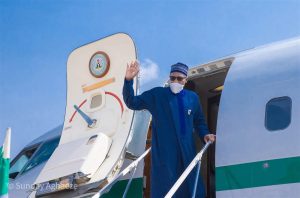 President Muhammadu Buhari will depart Abuja on Wednesday to participate at the International Development Association’s (IDA) summit in Dakar.

The IDA is an international financial institution which offers concessional loans and grants to developing countries. It is a member of the World Bank Group.

Malam Garba Shehu, the president’s spokesman confirmed Buhari’s participation in a statement he issued on Wednesday in Abuja.

According to him, President Buhari is expected to join other African leaders in an open dialogue on development challenges and priorities.

The African leaders will also dialogue on transformational initiatives that will lead to an outcome document, the Dakar Declaration.

The high level summit slated for July 7 would be hosted by President Macky Sall of the Republic of Senegal.

“​This commitment is expected to chart the way forward for the transformation of the economies of the participating nations in partnership with the World Bank/IDA.

“Topics slated for discussion include: Financing for Recovery and Economic Transformation in Africa; Agriculture, Livestock and Food Security; Human Capital; Digital and Technological Innovation; and Energy Transition and Climate Change,’’’ he stated.

The president will be accompanied on the trip by the Ministers of Foreign Affairs, Geoffery Onyeama; Finance, Budget and National Planning, Zainab Ahmed; as well as Industry, Trade and Investment, Adeniyi Adebayo.

Others on the entourage are the Governor of the CBN, Godwin Emefiele and the Director- General, National Intelligence Agency, Amb. Ahmed Abubakar.

The Director-General, Debt Management Office, Patience Oniha and the Managing Director of the Bank of Industry, Olukayode Pitan are also on the president’s entourage.

President Buhari and his entourage are expected to return on Thursday.