Power Tussle: I Will Not Give Up my Position- President Yahya Jammeh 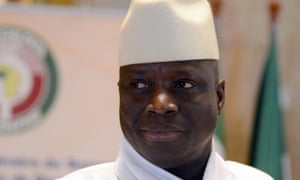 Despite losing election to Adama Barrow, and in face of pressure from West African leaders, Jammeh insists ‘nobody can deprive me’ of presidency.

Gambian president Yahya Jammeh said he would not step down and condemned efforts by west African regional leaders to get him to hand over power after he lost an election to challenger Adama Barrow.

The comments on state television late on Tuesday were a hardening of the veteran president’s position after days in which hopes mounted he could be persuaded to hand over power at the end of his mandate on 18 January, when Barrow is due to be inaugurated.

“I am not a coward. My right cannot be intimidated and violated. This is my position. Nobody can deprive me of that victory except the Almighty Allah,” Jammeh said.

“Already the Ecowas [economic community of west African states] meeting was a formality. Before they came, they had already said Jammeh must step down. I will not step down,” he said.

Jammeh initially accepted the results of the 1 December election, whose outcome was seen across Africa as a moment of hope. He is accused by human rights groups of the detention, torture and killing of perceived opponents during his 22-year rule.

On 9 December, he reversed his position and said he would challenge in the country’s supreme court the results of an election he said was riddled with irregularities.

Jammeh will not face prosecution on leaving office, a spokesman for the opposition coalition that backed president-elect Barrow told AFP late on Tuesday.

“There is no indication of a threat [of prosecution] or the need to threaten outgoing President Yahya Jammeh,” he said.

“President-elect Barrow says he is going to treat outgoing President Yahya Jammeh like a former head of state and would consult him for advice,” Sallah added.

On Tuesday, French president François Hollande said the results of the 1 December polls were “indisputable” and that Barrow “must be installed as soon as possible”.

“The matter is non-negotiable,” Hollande said after a meeting in Paris with visiting Senegalese president Macky Sall, whose country nearly surrounds the Gambia.

Last week, Ecowas said Jammeh must step down next month when his term runs out and vowed “to take all necessary action to enforce the results” of the poll, without spelling out what those measures might be.