According to him, the electricity that is being delivered is not at the level to support the economy and the population. 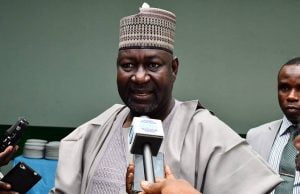 The  Minister of Power, Mr Abubakar Aliyu, said the power sector was on  a fast track to deliver service to Nigerians and urged stakeholders to work together to achieve the feat.

Aliyu said this on Thursday in Abuja while inaugurating the new Governing Board of the Transmission Company of Nigeria (TCN).

He called on the members of the board to speak and act with one voice as the power sector was on track to quicken the delivery of service to Nigerians.

“It is pertinent to appraise you of the very important job of TCN in the delivery of adequate and reliable electricity to Nigerians and the Nigerian economy.

According to him, the electricity that is being delivered is not at the level to support the economy and the population.

“We have been hovering around 5000 megawatts, either we go down a bit or we go up a bit for quite some time, we are unable to reach the level that we desired.

“ TCN is the institution responsible for transporting wholesale energy from the off grid power plant spread across the country to electricity distribution companies, ‘’ he said.

Aliyu said the appointment of the members to the board of TCN was to enable them to serve the country to the best of their ability, bringing their wealth of experience to bear on their decisions at board meetings.

He said the members had key responsibility in overseeing the strategic direction at TCN within the context of the policies of the Federal Government.

“Your role as company’s directors places responsibility on you individually and collectively to act in the best interest of TCN as you owe the company a duty of reasonable care in all your decisions.

“I wish to call on you to work as a team while superintending over the affairs of TCN, the non-executive directors amongst you are not on a full time job.

“ But your regularity, sincerity and quality of deliberations would to a large extent, determine the impact of your team,” he said.

On his part, Sen. Gabriel Suswan, Chairman Senate Committee on Power, said that every Nigerian is aware of the high deficit in the power sector.

`It is important we are here today to inaugurate the board of one of the parastatals that plays a pivotal role in the power supply chain in the country.

“Most times when you have board members and they start to function, you experience infighting,   personal interest and that becomes a problem and solution.

“So i want to appeal to the  chairman and members of the board  that you must hit the ground running to enhance what is already being done by minister and managing director of TCN .

“There is a lot that needs to be done; there is a lot you have to do in order to change the narratives in the power sector, ‘’ he said.

Suswam while congratulating the members, said that efforts were being made by the Federal Government to enhance the ability of TCN to deliver service to Nigerians.

Responding on behalf of other members, Chairman of the Board, Mr Bukar Buni, appreciated President Muhammadu Buhari for finding them worthy to serve TCN.

Buni said that the members would work tirelessly to put in their best to justify the confidence resposed in them.

He said that members were aware of the role power played in the socioeconomic development of a country.

“It is therefore in recognition of this that this board is going to be focused on providing an efficient, sustainable and effective service delivery, ‘’ he said