He expressed optimism that agriculture would contribute more to the growth of the state’s economy through export. 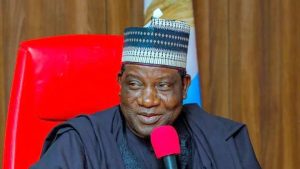 Gov. Simon Lalong of Plateau State has expressed the readiness of the state government to partner with a South Africa company, Wellington and White Farms, to boost food production in the state.

Lalong, who said this while receiving Mr Ian White, Managing Director, Wellington and White Farms, at the Government House in Jos on Tuesday, said the partnership would also aid food security and possible export.

He expressed optimism that agriculture would contribute more to the growth of the state’s economy through export.

The governor also said that Plateau was the only state in the country with the capacity to grow any kind of crop or flower that was only grown in other countries.

He said there were plans to upgrade the Jos Airport into an international status, which he said would ease the export of agriculture produce to other parts of the world,

The governor also assured an enabling environment and infrastructure that would make the partnership a reality.

Earlier White said that his company had identified 18 crops which the company would enhance and produce for the state to be able to sustain itself agriculturally.

The managing director said that the company would be looking at importing substitutions at the moment, adding that with the correct management, imports some products such as tomato paste could be eliminated

White said there would be a solid production base with the right fertilizers, chemicals and technology that would give greater yield to farmers.

He said the partnership would also fill in the farmers-agricultural managers gap in terms of information and knowledge sharing on new farming practices, improved seed varieties as well as modern methods of farming using technology.

White also said the partnership would also create over 200,000 jobs in the state.