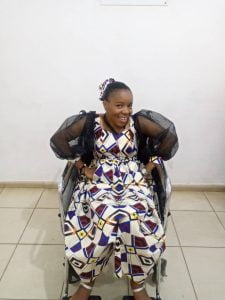 A 35-year-old Person with Disability in Bauchi State, Ms Princess Markus, is soliciting for support to enable her to win a modelling competition.

She told the News Agency of Nigeria (NAN) in Bauchi on Tuesday that she needed support from government, corporate organisations and individuals to qualify for the Arise Africa 1.0 modelling competition.

The competition is put together by Arise Africa Magazine to celebrate excellence in Africa and to recognise individual achievers.

The modelling category for Persons with Disability aims at empowering contestants.

Markus said that the competition was in its voting period and would elapse by the end of September and she required 1,000 votes to qualify for the final stage.

It costs N100 to cast a vote for a contestant.

“I am contesting to become a model from Bauchi State.

“At the final stage, contestants will catwalk and showcase their talent following set guidelines.

“I already scaled through the preliminary stages, one of which was modelling from a wheelchair.

“I also made a presentation of not more than 1,000 words on what I would change in the society and how I would change the phenomenon if I emerge a winner.

“I won in the earlier stages, but now I need 1,000 people to vote for me to qualify for invitation to camp,’’ she said.

Markus expressed the fear that she might lose out at this stage because of financial constraints.

She told NAN that winning at the competition would arouse the interest in the minds of youths to aim at becoming achievers.

Markus sustained spinal cord injury in 2014 in an auto crash.