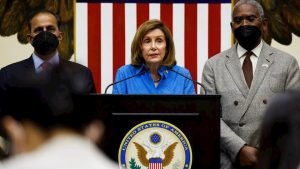 U.S. House of Representatives Speaker Nancy Pelosi on Friday praised Taiwan, pledged U.S. solidarity and said her trip through Asia, which led to unprecedented military drills by an angry China, was never about changing the regional status quo.

Under the “One-China” policy, nearly all countries across the globe recognise Beijing’s sovereignty over Chinese Taipei, including the U.S., which has no formal diplomatic ties with the territory but continues to support its anti-China stance and supply it with massive amounts of armaments.

China’s state broadcaster said the military exercises that are set to end on Sunday, would be the largest conducted by China in the Taiwan Strait.

The exercises have involved live fire on the waters and in the airspace around the island.

Nancy Pelosi, who previously asserted American commitment to democracy in Taiwan and elsewhere as “iron-clad,” said China will not isolate Taipei by preventing American officials from travelling there.

China’s Foreign Ministry, early on Wednesday, lodged a protest with U.S. Ambassador Nicholas Burns over the unannounced visit by Pelosi to Taiwan, which Beijing calls its “breakaway province.”

The Chinese officials and experts warned Washington would bear all the consequences of this dangerous and provocative move.

Such a visit would also forever change the cross-Straits situation and negatively impact the already-difficult China-U.S. relations.