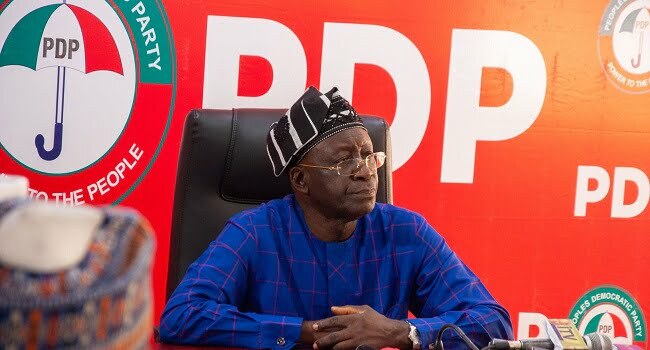 The News Agency of Nigeria (NAN) reports that the votes of confidence came amidst the calls for Ayu’s resignation by some leaders of the party.

Their agitation was that the party presidential candidate and national Chairman should not be from the same region of the country as specified by the party constitution.

NAN report that the motion for vote of confidence was raised by the Minority Leader of the House of Representatives, Hon. Ndudi Elumelu during the party 97 NEC meeting in Abuja.

Elumelu said that the NWC members deserved a vote of confidence because having led the party to victory in the July 16 Osun Governorship election and other achievements that had made for the party.

“I moved this day Sept. 8 that a vote of confidence be put before the end of this for their doggedness, their forthrightness, and their professionalism most especially been given us as Osun State

“I believe by extension they will give us Nigeria come 2023. I so move,” Elumelu said.

The motion was seconded by a member of the NEC from Kwara State, Ishola Balogun Fulani, which was unanimously adopted by NEC members president at the meeting.

NAN reports that the Chairman of PDP Governors Forum, Aminu Tambuwal, was asked to rule of the motion, but he shifted the responsibility to former President of the Senate, Sen. Adophus Wabara.

“If none, may I on want of time put to test. Those in favour of the motion of a vote of confidence on the Sen. Iyorchia Ayu led NWC say aye! Those against the motion say nay!,” he said.

NAN reports that the motion was unanimously adopted when Wabara raised the motion.