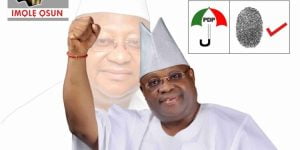 The Osun People’s Society Coalition has commended the Independent National Electoral Commission (INEC) for the successful conduct of the governorship election in the state, just as it congratulated the winner, Sen. Ademola Adeleke.

Mr Waheed Lawal, Chairman of the group, made the commendation in an interview with the News Agency of Nigeria (NAN) on Sunday in Osogbo.

According to him, in his observation, Saturday’s election was credible and applauded INEC for the improvement achieved.

“INEC has improved tremendously by their conduct of Saturday’s election.

“The Bimodal Voter Accreditation System (BVAS) machines worked efficiently, even though there were small hiccups, they scored over 75 per cent in the conduct of the election.

“We will, however, want to implore them to do more, as we are going toward the 2023 general election. INEC should not let Nigerians down.” he said

Lawal said the people of the state had made their choices urging the governor-elect, to fulfill the promises he made to them.

“The people of Osun has spoken and they have spoken loud and clear. They have chosen the governor of their choice.

“It is now left to the chosen one to fulfill all his electoral promises to them, because that is the reason he was chosen. He should not let the people down.

“Osun is a peaceful state before his emergence. We want to enjoy the peace.

“We need adequate security for lives and property of our people. He should fulfill all the promises he made in his manifesto.

“I congratulate him and wish him well,” he said.