the father, Sylvester was said to have died after five senior students of the school allegedly maltreated him for not joining their cult. 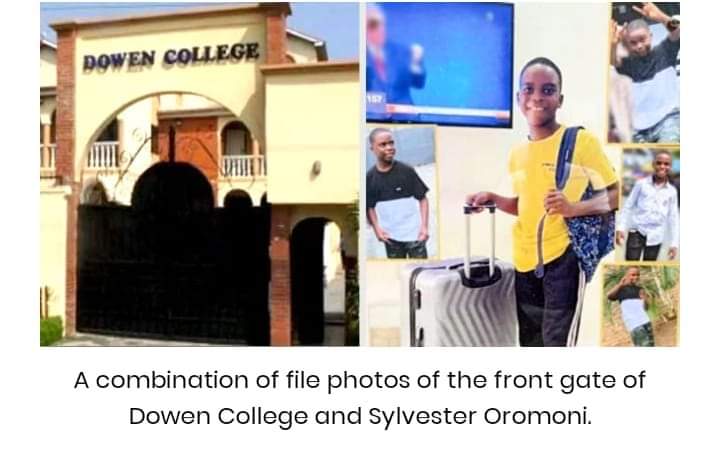 The Lagos State Government has cleared five students and five employees of Dowen College accused of complicity in the death of 12-year-old Sylvester Oromoni.

The state cleared them as well as the school following the Legal Advice of the Director of Public Prosecution, DPP, Ms. Adetutu Oshinusi.

But the father of Sylvester Oromoni (Jnr.), the late 12-year-old student of Dowen College, has frowned at the Lagos State clearing and subsequent order for the release of the five students linked to the murder of the Omoroni..

This is because according to the father, Sylvester was said to have died after five senior students of the school allegedly maltreated him for not joining their cult.

Channels Television obtained a copy of the legal advice which was addressed to the Deputy Commissioner of Police, State Criminal Investigation Department, SCID and the trial magistrate, Magistrate Olatunbosun Adeola.

According to the advice, the interim and final autopsy reports issued by the Lagos State University Teaching Hospital and toxicology report of post mortem samples and that of the Central Hospital, Warri were in agreement as to the cause of death namely: Septicaemia, Lobar Pneumonia with Acute Pyelonephritis, Pyomyositis of the right ankle and Acute Bacteria Pneumonia due to severe Sepsis.

The result of the toxicology is also not indicative of any toxic or poisonous substance in the body of the deceased.

The DPP’s legal advice, therefore, concluded that based on these findings, there is no prima facie case of murder, involuntary manslaughter and or malicious administering of poison with intent to harm against the five students, Favour Benjamin aged 16, Micheal Kashamu (15), Edward Begue (16), Ansel Temile (14) and Kenneth Inyang (15).

The state also cleared the minors of belonging to unlawful society due to insufficient facts to establish the offence.

“To hold otherwise would amount to sniffing for an offence and a speculative act which is not permitted in law. It is trite law that suspicion no matter how grave cannot be a ground for conviction”.

The state, therefore, directed that all the suspects should be released if they are still in custody.

In his response to the development later on Wednesday, the father of the deceased teenager, Mr Oromoni (senior), told Channels Television: “This one is not new to us. I remember on the 31 st of December when the Commissioner of Police was making his speech, he mentioned that at the instance of the governor, the Attorney General and the DPP, they have completed their investigation,” he said.

“They discovered that the children, housemasters have no case so he has released them on bail, discharged. He is not the court to decide this matter. What I will tell you is that the family will sit with our lawyers, we will respond appropriately and that time, all of you will be there.

“But on the meantime, let me assure you that on December 21, the same Commissioner of Police told me that they were not done with their investigation. They also told me that they are writing to the Attorney General of the state and the Governor to return those boys back.

“There was a holiday on Monday, Tuesday and all of that. Don’t worry; we are not bothered, we have heard of this before. This is just the beginning of the case.”

He, meanwhile, said contrary to the results conducted by the Lagos State government, that there was another autopsy carried out by the Delta State Police Command which suggested that his late son may have been fed with harmful chemicals.