Falope, while reacting to Julius’ death in an interview with the News Agency of Nigeria (NAN) in Osogbo on Friday, described the late saxophonist as a “very loving person and music trailblazer”. 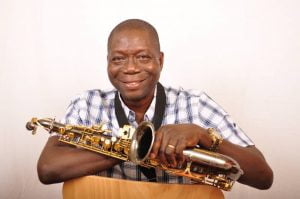 Mr Gbenga Falope, the immediate past National President of Performing Musicians Association of Nigeria (PMAN), says the late popular Nigerian Saxophonist, Orlando Julius, will be remembered for his good music.

Falope, while reacting to Julius’ death in an interview with the News Agency of Nigeria (NAN) in Osogbo on Friday, described the late saxophonist as a “very loving person and music trailblazer”.

NAN reports that the highlife musician, also known as Olusanya Ekemode, died at the age of 79 on Thursday.

His wife, Latoya Ekemode, confirmed his death to NAN in Lagos on Friday.

Ekemode said that Orlando Julius passed out in his sleep on Thursday night.

“Yes, my husband passed on late last night; there was no indication that death was coming. He was not ill, he only slept and died in his sleep,” she said.

Falope, however, said the vacuum the deceased left behind would be very difficult to fill because of the uniqueness of his style of music.

“It will take years to match his legacy. Baba Orlando Julius is a very loving person.

“I met him briefly in Osogbo when he returned from Ghana.

“We had one or two gigs together with Baba Jimoh Ibrahim.

“He is a trailblazer. He has left very large marks which I don’t think any of us (musicians) can fill the footpaths he left behind.

“He will greatly be missed and we will continue to remember him for all the good music he had churned out.” he said

NAN reports that Orlando Julius, a native of Ijebu Ijesa in Osun, was a saxophonist, singer, band leader and songwriter, closely associated with afrobeat music.

Some of his musical albums were: Disco Hi-Life, Ololufe, Love, Peace and Happiness, Dance Afrobeat and more.