He said that airlines were ready to fly to any part of the country once the route is well developed by the government. 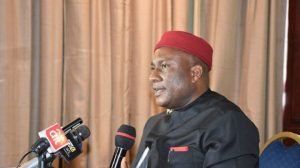 The Chairman of Air Peace, Mr Allen Onyema has called on the Federal and State Governments to develop new routes to grow the nation’s aviation industry.

Onyema made the call while speaking on the topic “ Challenges of Route Development in Nigeria’s Aviation “ at the maiden edition of the FAAN National Aviation Conference (FNAC) on Thursday in Abuja.

The theme of the event is “Advancing the Frontiers of Possibilities for Safe, Secure and Profitable Air Transport. “

According to him, air connectivity will boost the economy of the nation.

He said that airlines were ready to fly to any part of the country once the route is well developed by the government.

“Experts should be employed to keep data of the new routes as guide for airlines to utilise for decision making and planning “ he said.

Onyema also appealed to the Federal Airports Authority of Nigeria (FAAN) to give more space for airlines to operate at the Nnamdi Azikiwe international Airport.

He urged fellow airlines to strengthen mutual understanding to cut the cost of their operations.

The Air Peace boss cited inadequate equipment, low traffic and lack of government support among others as challenges of route development in the country.

FAAN Managing Director, Capt. Rabiu Yadudu, said that viability and profitability of developing route was highly paramount to the government.

According to him, small airport contributed low to the Gross Domestic Product (GDP).

Yadudu, however, said the government would not stop developing the new route to encourage airlines to patronise them and to promote civilisation in the nation.

“Our mission is to develop and profitably manage customer-centric airport facilities for safe, secure and efficient carriage of passengers and goods as world-class standards of quality.

“Our vision is to be among the best airport groups in the world, “ he added.