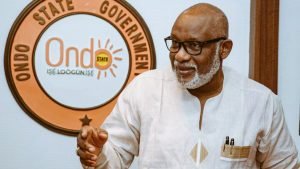 The Ondo State Government has decried the delay in the take-off of the Medical City project awarded to Medicus Multi Services Limited.

The project, sited in Ilu Abo, Akure North Local Government Area of the state, is expected to gulp $1.5 billion.

Prof. Dayo Faduyile, the Special Adviser to the State Governor on Health Matters, during a meeting with the contractor on Thursday in Akure, said that the project was of utmost priority to the state.

Faduyile disclosed that the project had been a subject of discussion at several state council meetings, and he had been directed to get in touch with the contractor.

The governor’s aide said that the state could not afford to have no work at the site until July ending and warned that the contract would be revoked if nothing was done before July ending.

Also speaking, Mrs Olubunmi Ademosu, the Special Adviser to the State Governor on Public Affairs and Inter-Governmental Relations, said that the July ending deadline was sacrosanct.

Ademosu explained that the government had waited long enough and could not afford to continue to wait endlessly.

She expressed her displeasure to the Medicus team, adding that she would not be part of any further delay in starting the project

Responding, Mr Ernest Michael, the Chief Executive Officer, (CEO) of Medicus Multi Services Ltd., explained to the officials the factors impeding the immediate commencement of the project, which was initiated in 2019.

Michael noted that the project would have started, but the COVID-19 pandemic caused the delay.

He explained that Medicus Multi Services Ltd. had already accessed $1 billion loan out of $1.2 billion approved for the project.

According to him, many obstacles set in that affected the actualisation of the project.

“Furthermore, the economic meltdown occasioned by Covid-19 has caused the upward review of the project cost from the earlier value of $1.2 billion to $1.5 billion in the present day economy.

“The preferred contractor did not accept all the terms and conditions in the Memorandum of Understanding, (MOU) earlier prepared by Medicus Multi Services Ltd.

“This contractor preferred a reviewed one, which is yet to be done, and which has caused the delay in moving to the project site.

“We plead with the state government to give us till September 2022 to review the MOU and fine-tune the work plan for the project to commence,” Michael pleaded.

Also, Dr Sunday Falae, a partner of Medicus Multi Services Ltd., who corroborated the explanation of the CEO, appealed to the state government “to give the contractors till September to be on a safe side so as to do a good job”.