Olubadan noted that the uncommon tenacity of purpose of the country’s industrialists had kept the country moving in spite of all odds. 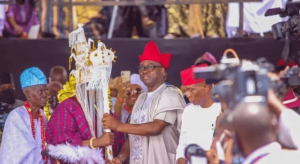 The Olubadan of Ibadanland, Oba Olalekan Balogun, on Tuesday lauded the “uncommon tenacity of purpose” of the country’s industrialists amidst the gloomy economy.
This is contained in a statement in Ibadan on Tuesday by the Olubadan media aide, Mr Dele Ogunsola.
The statement explained that Oba Balogun made the remarks during his royal visit to Henkel Nigeria Ltd situated at Oluyole Industrial Estate, Ibadan.
Olubadan noted that the uncommon tenacity of purpose of the country’s industrialists had kept the country moving in spite of all odds.
He commended the company for staying afloat and making robust contributions to the economic growth of Ibadan in particular and Nigeria in general.
“Those of you forging ahead despite the hardship industrialists are facing due to inclement economic weather, deserve commendation and I give you kudos,” he said.
Oba Balogun urged the company not to rest on its oars, but to continue striving for greater exploits by improving on its rating “as the second largest detergent producing company in the country and become number one”.
‘In doing that, let me have a greater feel of your presence in my domain by employing more of Ibadan sons and daughters.”
Earlier, the Chairman and Managing Director of the company, Mr Rajat Kapur, expressed gratitude to Olubadan and his entourage for the honour.
Don't miss
NEWS

Kapur said that the company, with its parent body in Germany, had been in existence for decades.
READ ALSO:https://brandpowerng.com/investment-in-fgn-securities-profitable-risk-free-dmo/
He said the company’s products had soared very high in the last four years of its debut in Nigeria.
“The company is today the second largest producer of detergent in the country and this is the fall-out of our cutting-edge activities in terms of production, distribution and marketing strategies,” Kapur said.
He, however, lamented that the growth of the company would have been greater than being experienced if not for high rate of taxes, epileptic or none power supply and exorbitant price of diesel.
“We are conscious of the need to grow and do more than we are doing, but those factors mentioned are serving as impediments,” he stated.
Kapur, alongside Mr Roman Rylyk and Mrs Jennifer Ikuenobe, the Plant Manager and Head of Human Resources respectively, welcomed Oba Balogun and his entourage during the visit.
Olubadan was accompanied by Osi-Olubadan designate, Ekerin Balogun and Ekerin Olubadan designate, High Chiefs Eddy Oyewole, Olubunmi Isioye and Hamidu Ajibade to the the company premises.
(NAN)