He noted that council boss had met with motorcycle association in the area on the development and how to map out other routes to ease movement. 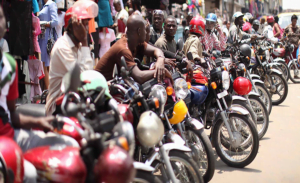 The Secretary to Surulere Local Government Area, Mr Kehinde Agoro says the council will set up a taskforce to ensure smooth implementation of commercial motorcycles ban in the area effective June 1.

Agoro told the News Agency of Nigeria (NAN) on Monday in Lagos that the council Chairman would inaugurate the taskforce as soon as the ban takes effect.

He noted that council boss had met with motorcycle association in the area on the development and how to map out other routes to ease movement.

He commended the Lagos State Governor, Mr Babajide Sanwo-Olu, for bold step in banning commercial motorcycles in the state.

NAN reports that Gov. Babajide Sanwo-Olu on May 18 issued a ban on operations of commercial motorcycles in some areas of the state from June 1.

According to him, chairman has setup a taskforce to ensure that the law is well implemented in Surulere and its environs.

“To be honest with you, the government cannot do everything alone, Gov. Sanwo-Olu had given that order and we need to follow suit.

“Whatever challenges are coming, we will tackle them immediately.
“The chairman is going to be setting a taskforce to ensure that the law is implemented.

“We need to have that taskforce and we are ready for them to start operating.
“We have spoken to the motorcycle association on alternative routes, so they can take people to their various destinations and they promise to look into it.

“We will continue to engage them to know whether they have actually come to a conclusion,” he said.

Agoro said that majority of the riders have started relocating to other nearby local governments that were not affected by the ban.

He added that the ban would affect the Internal Generated Revenue (IGR) of the council adding that they would look inwards to other areas to augment it.

“We are beginning to see a lot of the riders move their business to other local governments that have not sanctioned them.

“We understand that it going to also increase the IGR of these local governments but ours will reduce.

“We need to bridge the challenges we will face in our IGR because our revenue is going to reduce because of the ban.

“We are ready to get that looked into as well,” he said.

Agoro noted that the taskforce would also monitor movement from adjoining local governments such as Mushin to ensure that there’s no trespassing.

“Surulere is very close to Mushin Local Government and Mushin is not among the enlisted area affected by this ban, so definitely, there will be chances, whereby, motorcycles will be entering into Surulere.

“We have a taskforce squad already, they are to make sure that these policies as instructed by the government is implemented.

“We don’t have a choice, the law is the law, we just have to make sure we do what we are supposed to do.

“Banning commercial motorcycle riders will reduce our IGR in the local government but that will enable us to also look into other sectors to augment.

“It’s  a shame that we are not allowed to make decisions ourselves,” he said.

Agoro noted the banning of motorcycles in the Lagos Central would  extend to the other districts with a matter of time.

“Lagos is a mega city and as a mega city transportations such as motorcycles should not be found in such a state.

“There will be challenges caused by the ban but we are looking at alternative means of transportation in the area.

He urged residents to endure the development as the council would organise tricycle and minibus to move people closer to their destinations.

”We need to go back to our drawing board and get those tricycles which have not been banned yet to go to the various destinations of our people.

“The people at the grassroots are at the receiving end and they are already complaining.

“It is now our duty to ban motorcycles in Lagos Central the minority just have to adapt to it.

“We need to initiate that to the local Government under Lagos Central cause the decision we make in Surulere Local Government might be different from the one Eti-Osa is going to take.

“The use of taskforce in the local government is to ensure the safety of the masses and be able to identify anyone that doesn’t not belong to the rightful association of the transporters.

“It is also to help avoid cases such as kidnap and robbery from underground evil transport workers.

“We will be involving the use of identity cards amongst our transport workers in the local government in future. It is a step but we will get that done,” he said.

He appealed to the residents of the area to adjust and adapt to the new law adding that the council would organise a forum on other available opportunities.

“We will get there and we will be engaging the residents very soon, so we can talk and offer opportunities,” Agoro said.