OGP :15 states yet to sign up for responsive governance — Minister

According to him, the OGP week is an annual event set aside by the OGP Global Secretariat to celebrate the  wins of the initiative across the world. 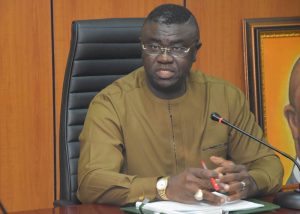 The Minister of State, Budget and National Planning, Clem Agba, on Friday said that 15  states were yet to sign unto the Open Government Partnership (OGP) Initiative for responsive governance .
Agba said this while  addressing newsmen as part of activities to mark the OGP week in Abuja.
According to him, the OGP week is an annual event set aside by the OGP Global Secretariat to celebrate the  wins of the initiative across the world.
He said that the OGP was a global multilateral forum consisting of 78 countries and 76 sub nationals, who committed to various transparency and accountability reforms for improved service delivery of its citizenry.
He added  that President Muhammadu Buhari signed into the initiative in 2016 in his desire to stamp out corruption.
He said that  after joining the OGP,  Nigeria developed  the first and second National Action Plans  around four thematic areas of fiscal transparency, access to information, anti-corruption, citizens engagement.
”Fifteen states of the 36 states of the Federation are yet to  sign unto the OGP platform.
“I therefore encourage  states who have not adopted the OGP to do so without any further delay, being a viable platform for ensuring more responsive governance.
“We have recorded some stories while implementing our laudable OGP programmes; today in Nigeria, the budgetary process is a lot more inclusive, participatory and accessible than it has ever been.
” All the different stages of the budget process are now participatory, citizens now engage and participate effectively in the process.
” As a matter of fact, the budget document has been  simplified such that it is all available at the click of a button.”
Agba advised citizens to deliberately play active roles in montoing the budget and goverment projects for effective implementation.
He said the  government developed  a portal and recently developed an App called the “eye mark” to help citizens  participation in the budgetary process.
Don't miss
NEWS

” We’re also working on the web App because, now we want citizens to see what government is doing.
“We want citizens  to be able to see projects that are done by government .
“We want citizens to be able to touch and feel  the projects that are done by government  so that we no longer have a situation where a world  class bridge  is said to be built where what we see years after is a wooden bridge .
READ ALSO:https://brandpowerng.com/women-accountants-inaugurate-new-executives-in-kano/
“That App is currently undergoing testing and you can have access to it by going to www.eyemark.ng to send your feedback  and help the government to monitor projects .”
The Non-state Actor Co-chair, Dr Tayo Aduloju, said that the fundamental essence of the OGP week was to  demonstrate that cocreation works.
Aduloju said when the collective capacity of government, private sector, civil society are mobilised to energise citizens to participate  in governance, the transformation could be seen and felt.
According to him,  the key lessons for Nigerians is that if they want a different country they don’t sit outside complaining, they should get involved to change things  that is  the oportunty that OGP is offering them.
Dr Gloria Ahmed, National Coordinator, OGP Nigeria, said that NAP two would end in May.
Its assesment  was ongoing to note the successes and challenges recorded.
Ahmed said that the committee to develop NAP  three had already been set up.
” Before  the  proper work on NAP  three commences, we are calling on Nigerians to let us know what their dreams and aspirations are, so that this will be included in that three.”
(NAN)