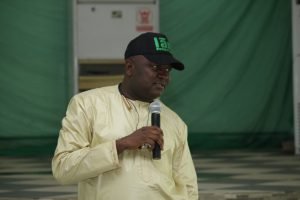 Olutoke, the Director of IHRC Housing Project in Nigeria, said this while reacting to an approach in the manner in which a section in the prophet’s church was demolished in Anambra.

In a statement signed by him on Saturday in Abuja, Olutoke said that the case which involved verbal and physical abuse, “is an infringement of a person’s rights and could lead to an indictment on the government of the day”.

He said that due to the complex and intricate nature of housing rights and tenement laws across the globe, there was need for dialogue by all stakeholders involved in a demolition case.

“There is the need for extensive dialogue with local and international stakeholders and this should be expended before carrying out an irreparable action such as a demolition of any building.

“While my office greatly frowns at citizens erecting structures without due official approvals, the government should carry bodies such as IHRC and other relevant bodies along in demolishing structures which have taken people’s sweats and lifelong savings to put up.

“This is to ascertain the rationale and motives behind such demolition exercises vis a vis plans for forestalling such acts and compensations where necessary.

He added that adhering to the advice would give credence to any governments’ urban development duties in line with global best practices.

He added that his office had swung into action to unravel the veracity of the government’s claims and the owners of the affected properties to detect and publicise issues of violations of fundamental human rights and insist on compensations where necessary.

He also assured Nigerians that the commission was working assiduously at providing affordable and comfortable houses in their names, to enable the poor, low and moderate income earners become house owners in the country.

The News Agency of Nigeria (NAN) reports that the Anambra  government on Thursday demolished a part of the Mountain of Holy Ghost Intervention and Deliverance Ministry led by Prophet Chukwuemeka Ohanaemere, a.k.a Odumeje in Onitsha.

This, according to the state government, was in line with the Onitsha Urban Renewal Plan.