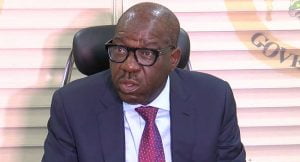 The Governor of Edo,  Godwin Obaseki, on Friday called for a broad-based diversification of  Nigeria’s economy, shifting away from crude oil.

The governor said the COVID-19 pandemic changed the economic structure of the nation, as the country had depended on crude oil since the past 40 years of its existence.

He noted that the state was thinking out of the box, as it embraced the broad base diversification to grow and develop its economy.

Obaseki said that states across the country had continued to rely on the  Federal Government allocation, adding that such was not obtainable in other climes.

He decried the fact that Nigeria had maintained the development  for over 40 years.

According to him, what the nation is getting from oil access is not enough to sustain the nation,  as the Federal Government in recent times, has struggled to get allocation to share amongst states.

“For us in Edo, we have come to the end of the road as we are deliberating on developing other resources to help raise revenue to develop the economy of the state.

“We have huge ecosystem to support tourism sector in the state. Tourism is not all about culture, monuments, ecotourism, business but it entails much, a whole totality and have an ecosystem that support it.

“Tourism must begin at home; it is local, we must have a strong tourism, locally base, to attract international tourist into the state.

“We have so many aspects of tourism in Edo and this workshop should in my view, enable our stakeholders to think about tourism in a much broader sense and understand the players within that ecosystem,” he said.

In his contribution, a facilitator at the stakeholders workshop, Salewa Akomolafe, said the focus of the workshop was to bring tourism development in Edo.