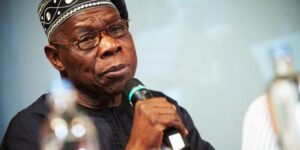 Former President Olusegun Obasanjo on Tuesday tasked  the National Population Commission (NPC) to conduct accurate, credible and acceptable data, in the forthcoming 2023 census, saying that it would assist the country in planning and formulating policies.
Obasanjo made the call during a courtesy visit by the Executive Chairman of NPC who came alongside with the  country representive from the United Nations Population Fund(UNFPA) in Nigeria, and  other officials of the commission at the Olusegun Obasanjo Presidential Library (OOPL) in Abeokuta.
According to him, if a credible and accurate census is achieved by the NPC, it will help the nation in  planning better  and formulate policies that will  aid the development of the country.
He, however, recalled the last census conducted in 2006 during his  administration, to be first in history to be conducted without conflicts, acrimony and contention.
He stressed that  Nigeria had failed to make adequate use of the results of census previously conducted in country.
“We are running away from making use of our census, the same way we are running from religion and ethnicity.
“The census should lead to real demarcation of constituencies which we have run away from since 2006
“Census figures that we do not use for  planning, for real demarcation and all that is not serving a useful purpose; it is a waste of money; I believe we should get this right, so that we will be able to know where we are today.
I don’t know how long we will keep running away from census, and we keep deceiving and lying to ourselves, by running away from the truth we must face  and deal with it,” he said.
Earlier, the NPC chairman, Mr Nasir Kwarra,  in his remark, commended Obasanjo for conducting a  successful free census in 2006 and for giving the commission the solid platform to continue.
Kwarra said the aim of the Commission’s  visit to Ogun was to monitor the conduct of the trial census in Imeko-Afon Local Government Area as one of the six areas selected for full enumeration across the country.
He noted that the overall objective of the trial census was to assess the overall preparedness of the NPC to conduct a successful population and housing census.
He described the trial census as a dress rehearsal for the  2023 population enumeration.
The chairman, who had earlier paid a similar coutesy  visit to the state governor, Dapo Abiodun and the Alake of Egbaland Oba Adedotun Gbadebo,
expressed the commitment of the  commission in delivering  a credible, accurate and acceptable census, assuring that the excercise would be successful.
He,  disclosed that 7,718 enumeration areas had been selected for the trial census to test run the suitability and readiness for the actual census in 2023, noting  that six local government areas would be fully enumerated during the tria.
“The six local government areas that will be fully enumerated are Toungo Local Government Area, Adamawa State (North-East); Daura Local Government Area, Katsina State (North-West); Karu Local Government Area, Nasarawa State (North-Central).
“Imeko-Afon Local Government Area, “Ogun State (South-West); Idemili South Local Government Area, Anambra State (South-East) and Brass Local Government Area, Bayelsa State (South-South),” are the reat.
He, however, gave assurance that  despite the insecurity challenges confronting the country, the commission would not relent  in carrying out the activities effectively in providing  the country an accurate data base  for planning, formation of policy  and development.
(NAN)
Sign in
Welcome! Log into your account
Forgot your password? Get help
Password recovery
Recover your password
A password will be e-mailed to you.