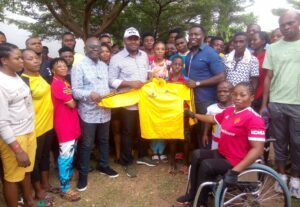 Gov. Chukwuma Soludo of Anambra has charged the state contingent to the 21st National Sports Festival (NSF) in Asaba, Delta, to exhibit excellence, and character and win many medals.

Soludo gave the charge while addressing the 249-man contingent at the Catholic Retreat Centre camp, Awka, before their departure to Asaba.

The governor, who was represented by Chief Ernest Ezeajughi, his Chief of Staff, also urged the athletes and officials to be good ambassadors of the state.

The News Agency of Nigeria (NAN) reports that the contingent is made up of 204 athletes and 45 officials.

He said that his government was committed and would give them the necessary support they needed to succeed.

“The message is that you should go there and conquer, go and make Anambra proud. Remember we are an A-state.

“We expect you to come back with laurels, not just the medals. Be of good behaviour, show them that we are good people.

The governor said that a rousing welcome awaits those who emerge champions in their various events.

Also speaking, Patrick Onyedum, Chairman of Anambra Sports Development Commission, who presented the team to the governor, said they were ready to go and excel.

Onyedum said that the athletes had been subjected to health tests and certified fit for the games by the medical team.