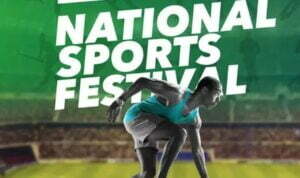 Twelve-year-old Florence Olarinoye of Lagos on Tuesday braved all odds to win a medal in weightlifting’s 64kg clean and jerk event at the ongoing National Sports Festival (NSF) in Asaba.

The News Agency of Nigeria (NAN) reports that Florence is a younger sibling of Adijat Olarinoye, Nigeria’s gold medalist in weightlifting at the 2022 Commonwealth Games in Birmingham.

Olarinoye, the youngest in a field of several veterans in her category, stood firm to stay in contention for a medal and she narrowly missed the gold medal through technical issues.

Olarinoye later told NAN that the secret behind her success was her determination not to feel intimidated while competing with older athletes.

“I am not afraid of anyone. I am happy that I am able to win a medal because I was inspired by my coach and my elder sister, Adijat who is my mentor.

“I always think I want to be like my sister or even surpass her records. I am also happy that I am the youngest here,” she said.

She however added that her training schedule used to sometimes clash with her education.

”Combining both have been a bit difficult. At times, I do skip school to attend trials. But I am getting the result,” the Lagos weightlifter said.

He said this was as a result of the commission being resolute in grassroots development of all aspects of sports.

“Lagos has been the incubator in producing young talents and we will continue to do that. Olarinoye is one of the results of our grassroots development.

“Olarinoye is just a 12-year-old girl and a promising talent. If she will surpass her sisters’s record is left to her to decide, but we have seen her determination and resilience.

“She does not want to be in the shadow of her sister. She has the fighting spirit of someone who is ready to give it all, and in the midst of veterans she is competing with that is is something to cheer about,” Gafaar said.

He also noted that Olarinoye had the lowest weight among her class, but the commission chairman did point out that her determination won it all for her.

Also, Ibrahim Abdul, President of Nigeria Weightlifting Federation (NWF), praised the courage of Olarinoye adding that the federation was ready to partner associations in the discovery of more talents for the sport.