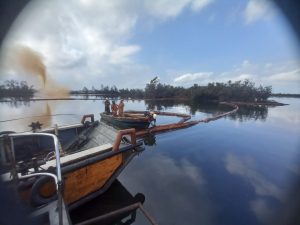 OML 18, which produces and exports crude through the 97 kilomeiter Nembe Creek Trunkline (NCTL), is located near the corridors of the export line in Rivers.

Residents said the facility had been discharging oil and gas into the coastal environment for the past one week.

Mr Idris Musa, Director-General of NOSDRA, confirmed the oil, gas leak to the News Agency of Nigeria (NAN) on Saturday.

Musa said NOSDRA had received report on the incident and efforts were being made to plug the leaking oil well.

“The company reported and oil recovery is underway. Efforts are on to stop the source which is a wellhead,” Musa said.

Also, a notification report by Mr Odianosen Massade, Corporate Communications Lead of Eroton indicated that the incident occurred on June 15, while a site assessment visit was carried out on June 23.

The oil firm said that preliminary findings indicated that the incident was due to suspected vandalism.

“This is to bring to your attention the loss of control of Cawthorne Channel well 15 resulting to oil spill,” the company said.

CAWC015L/S is a dual string well which started production in May, 1977. The shorts string was shut-in in 1988 due to high gas oil ratio (HGOR), while the long string watered out and well quit in 1991.

“The spill started on the 15th of June 2022 and immediately an emergency response procedure was activated.

“The operations team quickly visited the site for preliminary investigation and discovered that the wellhead was vandalised.

“It was also observed that the wellhead platform was removed, and this will compound the difficulties in gaining access to the wellhead.

“Our team of Well Engineers are working with contractors and evaluating the safest procedure that will be required to bring the well under control.

“We have activated our oll spill emergency response plan and booms have been deployed for mitigation in the area as a preliminary containment procedure.

“Notifications have also been sent out to all the relevant Regulators (NOSDRA, NUPRC & RSMENV).

“A Joint Investigation Visit (JIV) by all stakeholders is planned for this week although this is subject to readiness and availability of the key stakeholders.

“Our operations team is monitoring the site, commenced oil recovery and are prepared to respond to any escalation,” Eroton stated.

NAN reports that a similar incident reported on Nov 5, 2021 at nearby OML 29 operated by Aiteo Eastern Exploration and Production discharged more than 8,000 barrels of crude oil for some 32 days before the leak was plugged.

Eroton and Aiteo acquired their assets following the 2015 divestment by Shell Petroleum Development Company from some of its onshore assets.