He said that the reason for insuring ones business or property was to stabilise the status of any nation or individual in order to avoid the valuable perishing as a result of misfortune. 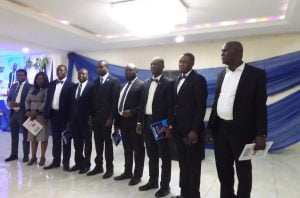 Oladeji stated this during his investiture as the CIIN chairman and inauguration of other executive members on Friday in Ibadan.

He said that the reason for insuring ones business or property was to stabilise the status of any nation or individual in order to avoid the valuable perishing as a result of misfortune.

The chairman said that many Nigerians don’t take the issue of insurance as priority in their businesses and other valuables as a result of lack of understanding of benefits to could be derive from insurance and wrong perspective.

“People tag insurance companies as fraudsters while this is not so. Insurance is to put you back in your previous position you occupied before any loss.

“Insurance has become things of reality with the supervision of National Insurance Commission (NAICOM). It is now being done in the right way as it is being done in developed countries,” he said.

Oladeji said that some Nigerian elites are illiterates when it comes to the subject of insurance, adding that it was necessary to insure ones property or businesses so as not to go down in case of any misfortune.

Speaking on his plans for the institute, Oladeji said the present executives would build on the legacies of their predecessors by creating a functional secretariat for the institute in the state.

He further said that the executives under his watch would improve on the education, training of its members and bring the institute to the door step of upcoming professionals.

The patron of the institute and one of the awardee, Chief Babajide Olatunde-Agbeja, a Chartered Insurance Broker, called on insurance companies to be fear and just while paying claims to the insured person.

Olatunde-Agbeja said claims must be fully paid to the beneficiary in order to encourage others to patronise insurance companies.

“As professionals, we sell integrity, moral and we must be trustworthy so that people can have total trust in us, please help us to improve our industry,” he said.

Afreximbank agrees to $207m facility with NEXI in combating COVID-19