Under the partnership, the institute trains officers of the elite military institutions and inducts them into its professional membership at the end of each course at the college. 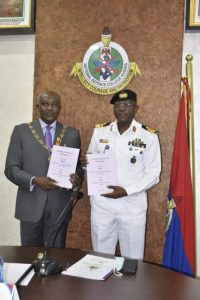 The Nigerian Institute of Management (Chartered) has renewed a Memorandum of Understanding (MoU) on military management training partnership with the National Defence College (NDC), Abuja, for another five years.

The MoU was renewed at an induction ceremony where 65 officers of the Nigerian Navy, Air Force, Army and Police Force were inducted on Thursday.

The News Agency of Nigeria (NAN) reports that the partnership to train officers originally started with an MoU in 2014, which elapsed in 2021.

Under the partnership, the institute trains officers of the elite military institutions and inducts them into its professional membership at the end of each course at the college.

Amongst the beneficiaries of the programme were officers from Congo, Mali and Sierra Leone.

Commandant, NDC, Rear Admiral Murtala Bashir, said the college decided to renew the MoU with the institute because of the value the training added to the management professional know-how of the beneficiaries, the armed forces and the nation.

He commended the institute for bringing unparalleled management professionalism to the table as justification for the decision to renew the MoU.

President, NIM, Major General Abdullahi Muraina (Rtd), commended the Commandant for the renewal, saying the action showed his support and belief in capacity building of the officers of the nation’s armed forces.

Muraina enjoined the officers to apply the values of integrity, probity, accountability, efficiency, effectiveness and fairness in all their dealings going forward.

He noted that pursuant to the power conferred on the Institute by its Charter (NIM Establishment Act 14 of June 19, 2003), there existed minimum professional standards of practice and behaviour, which all members were expected to adhere to.

“This ceremony, the eighth in the series, is yet another milestone in the relationship between our two institutions.

“Professional certification is not an end in itself, therefore, this success does not mean you should rest on your oars but it is a call to duty.

“As your journey as professional managers begins today, a lot is expected from you by the institute, the armed forces and the nation,” he said.

According to him, by affirming the institute’s code of conduct in the course of the ceremony, young managers have assented to be guided by it.

“And this means that you have accepted to live the vision and values of the Institute at all times.

“You must, therefore, render selfless service to the armed forces and the nation, live above board and continue to contribute to the strategic transformation of the Nigerian economy,” he said.