FIBA explained that the decision was informed by the decision of President Muhammadu Buhari to withdraw the Nigeria Basketball Federation (NBBF) from international basketball competitions and activities for two years. 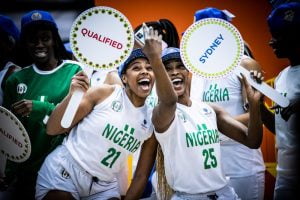 FIBA explained that the decision was informed by the decision of President Muhammadu Buhari to withdraw the Nigeria Basketball Federation (NBBF) from international basketball competitions and activities for two years.

“In subsequent communications with the NBBF, and in spite of FIBA’s request, it has become clear that against the circumstances created by the Nigerian government’s decision, the NBBF is unable to confirm its participation in the FIBA Women’s Basketball World Cup 2022,” FIBA had added.

In handing the ticket to represent Africa to Mali, FIBA considered the fact that the west African side are the second-ranked African women basketball side.

FIBA also issued a thinly-veiled threat of potential sanctions on Nigeria over its government’s decision which meant D’Tigress were not going to be at the competition.

The competition is scheduled to hold from Sept. 22 to Oct. 1 in Australia.

“FIBA will announce whether there will be any other decisions related to NBBF’s participation in other FIBA competitions and any potential disciplinary measured in due course,” it further said.

D’Tigress’ exclusion from the Women’s Basketball World Cup is the first cas ualty arising from that May 12 decision by the Nigerian government to put its basketball teams on international exile.

A statement from the Federal Ministry of Youth and Sports Development had cited “the unending crises which have plagued and nearly crippled basketball development in the country” as the reason for that decision.

The statement also said the withdrawal was to provide government with the opportunity to revamp the sport from the grassroots, as well as revive the domestic leagues.

Indeed, basketball administration in Nigeria has been rocked with leadership crisis for over five years now.

In June 2017, internal crisis within the NBBF manifested in parallel elections into its board.

While a section of its congress voted in Musa Kida as its new president in Abuja, a parallel one had re-elected Tijani Umar a day earlier in Kano.

At the heart of the leadership crisis was the administration of basketball by the NBBF without a ratified Constitution.

Thus, FIBA had embarked on several fact-finding meetings with stakeholders from the Sports Ministry, the Nigeria Olympic Committee (NOC) and the two factions led by Kida and Umar.

In the end, FIBA appeared to have thrown its weight behind the Kida-led NBBF.

However, the issue of sponsorship of the sport’s premier league, which was handled by the Umar-led NBBF board before 2017 and involving about 2.2 million dollars, became a problem.

In the long run, while Nigeria continued to participate in international basketball tournaments and activities through the Kida-led board, the local league had to bear the brunt of the leadership crisis.

Several efforts by the Sports Ministry to broker peace between the warring NBBF factions had proved abortive, hence the decision of government to place a ban.

However, some stakeholders have said Federal Government’s action was unilateral, and the self-imposed exile decision is counter-productive and would not proffer any lasting solution to the crisis.

Others believe, however, that government’s decision did not take into account the sacrifices and dedication of basketball players in the national teams whose hopes would have been dashed.

FIBA Africa President, Anibal Manave, warned that the ban could cause more harm than good for Nigeria.

“This is not going to help Nigeria… For example, the men are playing the 2023 World Cup Qualifiers. If they are banned, they won’t play the qualifiers.

Referring to Nigeria as one of Africa’s basketball powerhouses, Manave said Nigeria’s recent exploits in both men’s and women’s basketball were earned through hard work and should be protected.

D’Tigress’ captain, Adaora Elonu, said at a virtual meeting of basketball stakeholders that lack of communication and decisions being taken on the basis of assumptions contributed to the crisis.

“There was a lot of misinformation put out there. There was definitely no checking or communicating with players and I think that’s the biggest problem,” she said.

Her team’s exclusion from the FIBA Women’s Basketball World Cup has understandably infuriated many of the players whose heroics in the first instance earned Nigeria a coveted slot.

Responding to news of Mali replacing Nigeria at the World Cup, Landerneau Bretagne Basket’s point-guard, Ezinne Kalu, expressed doubts about her interest to ever play again for the national team.

The Most Valuable Player at the 2019 Women’s AfroBasket took to Twitter on June 2 and said: “I mean `wow’. I don’t think I will ever wear the green and white again.”

The frustration expressed by national team basketball players is understandable.

Without any doubt, over the past eight years, basketball has brought Nigeria more international glory than any other team sport.

The team was the first African side to defeat the US men’s national team.

It was also the first African team to qualify for the Olympics through the FIBA World Olympic Qualifying Tournament.

D’Tigress, the most successful women’s national team on the continent, have even recorded more recent successes.

They also got to the last eight of the 2018 FIBA Women’s Basketball World Cup.

Sunday Dare, the Minister for Youth and Sports Development, said during the inauguration of the Interim Management Committee (IMC) for NBBF that Nigeria wants to focus on grassroots basketball development.

While developing the game at the grassroots is a welcome mindset, the sector’s experts believe that consolidating on the national team’s achievements cannot be sacrificed on the altar of this.

They added that withdrawing from international engagements is a disservice to the efforts and sacrifices of those who took Nigeria’s basketball into international limelight.

Already, the North-East Zone Basketball Association has said the action amounted to throwing the baby out with the bathwater.

It added that teams belonging to state basketball associations in the zone would not participate in any basketball activity organised by the newly-inaugurated IMC.

For now it is unclear whether FIBA will issue further sanctions, how tough those sanctions will be and when.

However, for the good of the game and the reputation of Nigeria, warring parties need to close ranks and give the Federal Government a reason to rescind its decision.

Board partners FIRS on revenue mobilisation in Benue