Owokalade said investments of such nature would leave great marks on the nation’s employment indices through its expected provision of thousands of direct and indirect labour particularly at the location. 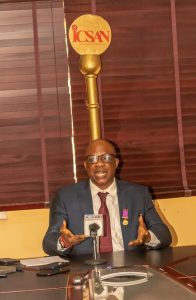 Mr Gbenga Owokalade, President, Institute of Chartered Secretaries and Administrators of Nigeria (ICSAN) on Wednesday charged Nigerians to continue to invest in signature projects that would directly impact the country’s economy.

The ICSAN President, during the Institute’s quarterly parley in Lagos,gave the advice in reaction to the recently commissioned Dangote fertilizer project.

Owokalade said investments of such nature would leave great marks on the nation’s employment indices through its expected provision of thousands of direct and indirect labour particularly at the location.

He added that the transportation sector and even the country’s depleting foreign exchange would also be impacted by the development.

“Honestly, Nigerians investing in the the Nigerian economy is the way to go instead of all the time waiting for foreigners to come and do the investing for us.

“As an Institute, we are very happy about the development and we laid Alhaji Dangote for taking the initiative not just on this project but even with the coming refinery.

“When this nature of development continues with many other Nigerians investing in signature projects, the economy would become more self sufficient, and grow more sustainably.

“Food security would be addressed, Naira would get to an appreciable level in the international community, and the narrative of the country would definitely change against what we are seeing daily,” he said.

Addressing the fire incident at Apongbo area of Lagos Island today, the ICSAN President, commiserating over the losses, stressed the need for government to rise up to the occasion to curtail future occurrences.

He stressed the need for government to adopt regulations that cleverly compels risk mechanisms such as insurance against incidences of this nature.

“There’s also need to ensure that mechanisms that prevent human activated fires are in place and also empower the fire service by improving their capacities to fight or ameliorate the effects of these incidences in the future,” he said.

As election draws close, he charged Nigerians to hold leaders and contenders accountable to their antecedents.

According to him, people who have no credible antecedents should not be allowed to lead the new and future Nigeria that we are looking forward to.

Owokalade also bemoaned the current rift between the Federal Government and the Academic Staff Union of Universities (ASUU), saying the situation was a big challenge to the Nigerian education sector.

As an Institute, the President posited that government must sincerely make its position known and stand by it to put an end to the back and forth which had elongated the academic tenure of many Nigerians.

“The academic environment must not be affected by things like this. We cannot keep quiet as an Institute nor be diplomatic in making statements that addresses this issue.

“Government must be able to define what is fundable within the academic environment and stand by it thereby addressing this issue once and for all,” he said.

Addressing the ongoing Russian – Ukraine crisis, Owokalade urged both nations to visit the negotiation table as a place to end the rift.

He said that the impact of the war was already being felt by global economies, Nigeria inclusive with soaring confectionery, gas and a host of other  prices.

He, however, charged the Nigerian government to begin to embrace the cassava/corn based bread model and implement policies that would engender food and oil sufficiency for the country.

“Nigeria ought to benefit from the effects of the war but oil theft and bunkering is not allowing that to happen.

“Government needs to be more strong willed to address these issues because players in that sector are complaining seriously.

“Also, government should find a way to help the Ukraine student returnees either by allowing them continue in Nigerian owned Universities or organising with  good foreign universities so that they don’t loose in all ways,” he said.

The ICSAN President also reiterated the Institute’s commitment to preaching good corporate governance parlance across all the sectors of the Nigerian economy.