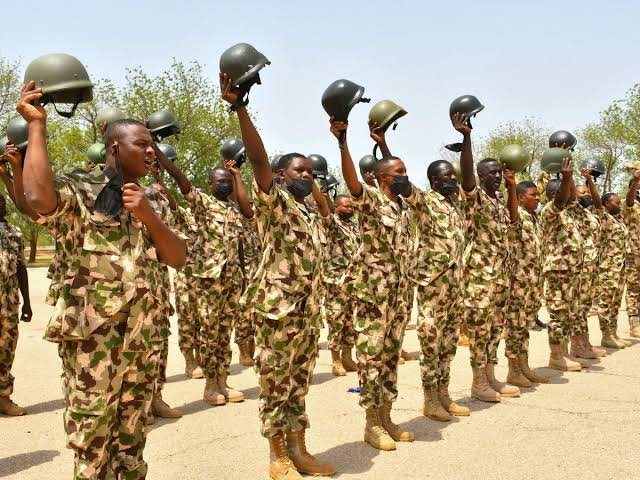 As Nigeria marks 62nd Independence Anniversary, some residents of the North-East have commended the military and other security agencies over the successes recorded in the campaign against Boko Haram insurgency and criminal activities.
They also lauded President Muhammadu Buhari’s administration’s commitment to end terrorisim, banditry, and kidnapping, protect lives and property as well as secure territorial integrity of the country.
The residents who spoke in Damaturu and Maiduguri, said the feat achieved addressed threats being posed by the terrorists to national security and Nigeria’s corporate existence as a sovereign state.
They opined that the decade-long insurgency was on the verge of extinction sequel to the successes recorded by security forces as well as rehabilitation and resettlement programmes initiated by the government.
A resident of Maiduguri, Chidi Omeji said that terrorism in the region was a major threat that challenged Nigeria’s quest to nationhood in it’s over 60 years of independence.
Chidi, who is also the National Coordinator, Citizens Initiative for Security Awareness (CISA), noted that banditry and kidnapping also presented another threat in parts of the North-West and North-Central regions.
“For you to understand where we are now in terms of insecurity, you must reflect on where we are coming from.
“Security challenges are dynamic and every nation experience one form of insecurity or other.
“Today, Nigerian security agencies led by the Armed Forces are really on top of the situation.
“They put extra efforts in ensuring that the majority of the population are protected.
“There is seeming peace around country despite pockets of insecurity unlike the situation in 2014 and early 2022,” he said.
He said the military and security agencies had shown committment by ensuring paradigm shift in the conduct of operations which resulted to recent positive results against terrorism and other criminal activities.
According to him, the president has demonstrated great political acumen to transform the military and other security agencies to enable them to protect the country against internal and external aggression.
This, he said, was a spectacular achievement towards guaranteeing a unified and peaceful country.
Another resident, Mr Abdulrahman Muhammed, Coordinator, Media Advocate for Peace Foundation, said the military succeeded in decimating the insurgents and restored peace to the troubled North-East and other parts of the country.
He said that a swath of territories hitherto under the insurgents’ control in Borno, Adamawa and Yobe had been liberated.
The peace ambassador noted that over 70,000 insurgents had surrendered sequel to the renewed military onslaught against the terror group.
Also, Ali Abbas, an Associate Professor, Political Science Department, Yobe State University, said  the efforts of the security forces against insecurity would herald Nigeria’s quest for sustainable democracy.
“Insecurity poses serious challenge to political stability and development in Nigeria.
“People are asking what is the value of democracy if it cannot guarantee protection of lives and properties.”
“Terrorism, kidnapping and mass abduction among others, had never happened in the country. This does not allow Nigerians to appreciate the political development in the country.
”Because, to some, it is not just about political development, but about political, social and economic development, which translates to better life, prosperity and so on,” he added
In the same vein, Babagana Wakil, a Maiduguri based Political Analyst, lauded the Federal Government over the establishment of the North-East Development Commission (NEDC) to fast track Reconstruction, Rehabilitation and Resettlement (RRR) prgramme in the war-ravaged region.
Wakil also commended the government for its poverty eradication initiative such as the N-Power, Social Investment Programme (N-SIP), among others.
He said the gesture would eradicate poverty, enhance wealth creation, promote economic security as well as address root causes of violent extremism and other criminal activities.
“We appreciate the government and security agencies for their commitment towards building a unified and secure country.
“Their contributions saved the country from eminent danger, and we are proud of our country,” he said.
Editor’s Picks  FG set to commission Kajola rolling stock plant –Sambo