Runsewe, who described football as a unifying factor, expressed happiness over the huge turnout of Nigerians at the stadium. 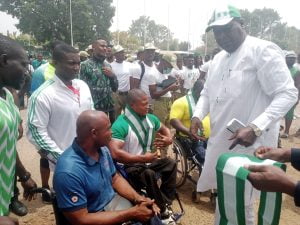 Otunba Olusegun Runsewe, the Director-General, National Council for Arts and Culture (NCAC), has distributed free tickets, national flags and water packs to fans to cheer the Super Eagles of Nigeria to victory.

The News Agency of Nigeria (NAN) reports that the Super Eagles are hosting the Black Stars of Ghana in the second leg match at the Moshood Abiola Stadium, Abuja, on Tuesday.

The match is to qualify winner for the 2022 World Cup in Qatar.

Runsewe, who described football as a unifying factor, expressed happiness over the huge turnout of Nigerians at the stadium.

“There is a lot of tension in the country. People are agitating for one thing or the other. It is time for us to show them that there are people who love this country and her project.

“A lot of Nigerians will love go to the stadium to support the national team but they cannot afford it.

“That is why today we have come with enough tickets, national flags and water packs for fans to take to the stadium to cheer Nigeria’s national team to victory.’’

According to the director-general, the number of Nigerians that have come out today is a sign that Nigerians are united.

“Since we started issuing these tickets, there is no tribe or religion, every Nigerian is united in one common interest and goal that Nigeria must win this match,’’ he said.

Runsewe appealed to Nigerians to give maximum support to the national team so that they could qualify for the World Cup in Qatar.

This, he said, would serve as a good platform to once again market Nigeria’s rich and diverse cultures, arts and crafts which would further attract global patronage.

Elegbeleye said that when Runsewe was the Director-General of the Nigerian Tourism Development Corporation, he established Tourism Village at the Commonwealth Games in Scotland.

According to him, now that he is heading the NCAC, he is always showing our heritage by establishing Arts and Culture Village at every international event.

Dr Rafiu Oladipo, the President-General, Nigeria Football and other Sports Supporters Association, appealed to Nigerians to support the national team, expressing optimism that Eagles would come out victorious.