Hamisu said that while seven of the vehicles seized were being smuggled into the country through unapproved routes, the remaining five were used to convey unregistered drugs and other contrabands. 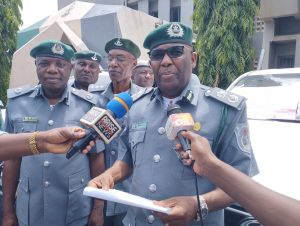 Briefing newsmen on Tuesday in Kaduna, the Comptroller, NCS, Federal Operations Unit, Zone “B” Kaduna, Mr Albashir Hamisu, that 92 seizures were recorded by the unit within the  period including twelve vehicles.

Hamisu said that while seven of the vehicles seized were being smuggled into the country through unapproved routes, the remaining five were used to convey unregistered drugs and other contrabands.

He said that some of the smugglers intercepted concealed bags of rice among bags of beans to avoid detection.

Hamisu said that operatives of the unit also intercepted smugglers with premium motor spirit (PMS) in 303 gallons of 25 litres being smuggled outside of Nigeria.

He said that operatives foiled the smuggling of foreign vegetable oil in 22 gallons of 25 litres into Nigeria.

The comptroller further said that his men also seized 642 cartons of foreign spaghetti and macaroni as well as 1,314 bags of 50kg foreign parboiled rice.

He appreciated members of the public for their cooperation in providing information on the activities of smugglers and solicited for more support.

Hamisu also thank the FG and NCS management for the recent promotion of officers saying this would further motivate them to give their best in the performance of the duty.

11 ships with petrol, others berth at Lagos ports