Nigeria at crossroads again: Do not die in their war!

The country’s diversity is enough to be its strength like other prosperous multiethnic countries like the United States of America, Canada, Australia, among others. It’s imperative to leverage the diversity of the country to fix its many woes.

By the way, some commentators who are conversant with this country’s history and its different epochs say Nigeria has always been at a crossroads all her life. They contend that the ability to navigate the country and keep it going when at a crossroads is what distinguishes one administration from the other. Debatable? Well, that’s for another day and time.

For now, one of the critical challenges confronting the country at the moment is the issue of insecurity which has practically brought the nation to its knees.

As it were, the tide of insecurity across the length and breadth of the country is perpetrated and perpetuated by murderous bandits operating in the northwest zone of the country while the northeast zone remains an enclave of Boko Haram insurgents and their cousins-ISWAP.

Still, the issue of ‘unknown gunmen’, a code name for non-state actors who have taken to killing people, security personnel and burning down public facilities such as prisons, police stations and electoral offices, has become the order of the day in the southeast which remains precariously on the margin of an imminent explosion if nothing is done urgently to rein in the violent criminals.

The southwest, south-south and the north-central are also not immune from these violent criminals whose stock in trade is to kill, maim and kidnap for ransom.

Unarguably, one of the resultant effects of the insecurity ravaging the country is that it has exacerbated the economy which has been hemorrhaging long before now with two economic recessions in quick succession, though technically exited, according to official data from the National Bureau of Statistics (NBS).

It has also contributed significantly to the burgeoning cost of food in the country. The farmers who ought to do farm work are scared of going to the farm because of the fear of the unknown- kidnappers, bandits and criminal herdsmen. The result of the latter is mass hunger thus placing Nigeria at a crossroads on how to urgently address the problem of food insecurity, an existential threat to the unity of the country.

There’s hunger on one hand and there is also mass unemployment of the country’s teeming youth, with a lot of them, in the absence of legit jobs, have now taken to committing cybercrimes.  On the other hand, a lot of operators in the small and medium enterprise ecosystem are gasping for oxygen of survival amidst surging inflation, unfriendly lending and interest rates, in addition to a general inclement business climate that permeates the land, unstable policies and even uncertainties in the private sector.

Certainly, the Federal Government, given its limitations and certain challenges, is assumably doing the best it can in the present circumstance to fix the country; notably building critical infrastructures that can spur economic revolution while taking the hydra-headed monster -insecurity -head-on, though the latter seems to be overwhelming the security architecture of the country. A lot still needs to be done to revitalize the economy and build human capital development alongside investments in relevant physical infrastructures.

On the parlous state of the economy, one may recall that the President -Muhammadu Buhari- while presenting the 2022 Budget estimates to the National Assembly recently, hinted that the country had to resort to aggressive borrowing to reflate the economy to defeat contractions in the country’s GDP. It is noteworthy that the 2022 budgets of both South Africa a nation of 60 million and Egypt 102.3 million are four times that of Nigeria! Imagine if that decision, tough as it was, had not been taken, Nigeria would still be probably marooned on the island of recession which might have led to economic depression by now! The flip side of the massive borrowing, however, is the humongous debt profile of the country, though government officials keep saying it is sustainable and manageable. It has to be stated that Economic Critics disagree with the government on this. 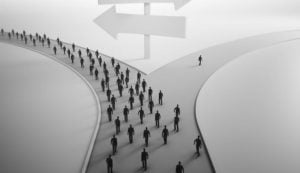 The long and short of it is that:  the onus of fixing the many afflictions ailing the country rests squarely on those in government leadership positions and those aspiring to take over from them. The rest of Nigerians can only contribute their quota by being civically responsible, demonstrate rational patriotism and also be able to nurse and nurture an abiding faith in the ultimate good of the land for those who live in Jerusalem are encouraged to pray for the good of the land.

While the country is confronted with a deluge of crossroads requiring urgent and quick interventions(decisions) that will spur enduring solutions, the most urgent one is the road to the 2023 general elections, which, for now, is paved with many uncertainties, as usual.

And this is where the crux of this quick intervention lies: those in the political class will go to any length to acquire power and always do so, especially in Africa, nay Nigeria, by resorting to throwing up parochial sentiments (disguised as political soundbites) that tend to expand the country’s ethnoreligious and socio-economic fault lines rather than seek to provide working and alternative ideas that can help fix the country’s myriad foes.

Members of the Nigerian political class are smart; they know what to do to gain the support of unsuspecting members of the public, who, unfortunately, are far too divided along ethnic and religious lines, no thanks to many years of weaponization of these fault lines by clever-by-half politicians to access political power and positions of influence.

They are at it again as the struggle for 2023 gathers momentum. My admonition to you all is that do not die in their war. While it may seem, they are at war when struggling for power, the truth is that all of them, regardless of their current political affiliations and alignment, always have a point of convergence at the penthouse beyond the gaze of the commoners when the battle for power has been lost and won.

The country’s diversity is enough to be its strength like other prosperous multiethnic countries like the United States of America, Canada, Australia, among others. It’s imperative to leverage the diversity of the country to fix its many woes. How to do that: harness and harmonize the comparative strengths of each of the tribes and zones for the overall benefit of the greatest number of the people. To do that, the citizens need to realize that they must not dance to the drum of war being beaten by the political elites. They know what they are doing; the result is power acquisition and that’s it. I repeat: do not die in their war and we all can make the country great again by doing so.