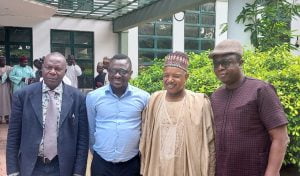 Nigeria remains an attractive investment destination of West Africa and other parts of the world, Gov. Atiku Bagudu of Kebbi has said.
Bagudu made this known when the Chairman of WACOT Rice Company, Alhaji Faruk Gumel visited the governor at the Government House, Birnin Kebbi on Tuesday.

The governor expressed optimism that Nigerian Rice Farmers could double their production with the application of scientific methods which he described as necessary in the modern time.

He thanked WACOT for supporting farmers with improved rice seeds, and expressed happiness that the company has demonstrated that Nigeria is an investment destination.

Bagudu pointed out that the second rice mill established by WACOT in Argungu was a testimony to this objective which has also facilitated self sufficiency in rice production attained by the country.

“WACOT has really demonstrated that this is real and we can feed our immediate neighbours and other parts of the world especially with rice.
“The farmers are now doubling their capacity and work is in progress. They have promised to commission the project before May 29, 2023 and from what I saw, it will be real.
“Nigeria is a big market for rice and that efforts of WACOT in the state had boosted financial inclusion,” he said.
He recalled that President Muhammadu Buhari assumed leadership of Nigeria in 2015 when the world economy was in crisis and we don’t have money to import food that we were used to importing.
“Buhari decided that Nigerians will eat what they grow and grow what they eat and he launched Anchor Borrowers Programme in 2015.
“Alhaji Gumel was instrumental to that happy development and WACOT immediately took-off in Kebbi state,” he said.
He recalled the robust partnership between Kebbi State and Lagos State that gave birth to Lake Rice, saying, “it really worked well.”
Responding, Gumel briefed the governor on the purpose of their visit which according to him is on ensuring enhanced agricultural production with possible support from financial institutions.
Gumel who is also the Chairman Nigerian Sovereign Investment Authority said the firm was expanding its rice mill and doubling its capacity.
He said that the visit was part of activities to mark WACOT’s partnership with USAID, tagged: “Rice Enhancement and Financial Inclusion Programme.”
The chairman said WACOT will inaugurate the financial inclusion programme towards capturing the non-banking farmers in the state, and also to highlight the progress made and assess the impact of the activities of the company..
“In the last two years, it has really been difficult to get people to be banked and we are here to change the narrative,” Gumel said.
An official from Lagos State and Director, Rice Value Chain, Mr Balogun Wakilu Olabode commended Bagudu for laying the foundation of agricultural revival in Nigeria especially rice production, saying that the brain-child of the governor, “Lakerice”, is the most popular choice among Lagosians.
An official of WACOT, Mrs Habiba Suleiman presented a progress report of the company.
Sign in
Welcome! Log into your account
Forgot your password? Get help
Password recovery
Recover your password
A password will be e-mailed to you.